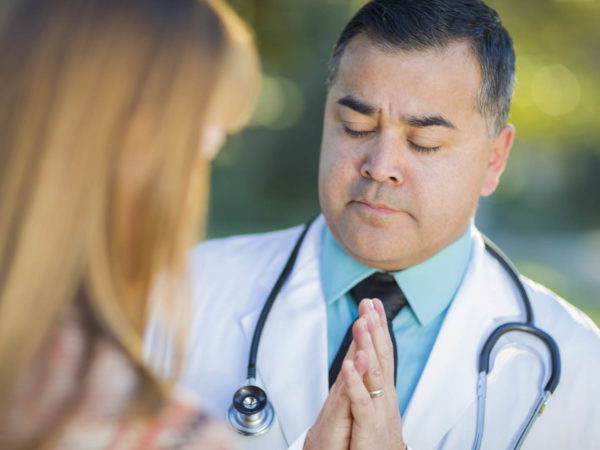 Yes, I am convinced that the beliefs of health-care providers can affect patients. However, when choosing a physician, spiritual attitudes and issues should not always be paramount. If you’re having surgery, a doctor’s technical skills and solid experience would be more important than his or her personal beliefs. But if you have a serious, chronic illness, or one requiring long-term care, you might want a physician whose beliefs are congruent with yours.

The issue of spirituality and the physician-patient relationship is getting a fair amount of attention in the medical community these days. In one fascinating study at Duke University Medical Center’s VA hospital, a doctor and nurse recruited prayers for patients undergoing various cardiac procedures. Those patients who opted for the outside prayers offered by strangers had 50 percent to 100 percent fewer side effects than did the patients who rejected the offer. A number of small studies reviewed in the June 16, 2004, issue of the Journal of the American Medical Association (JAMA) found that many patients want physicians to consider their spiritual needs; in one study, 48 percent of the patients interviewed wanted their physicians to pray with them.

Only a few studies have looked specifically at physicians’ attitudes and behaviors about spirituality in their dealings with patients. In one study of 476 physicians cited in the JAMA review article mentioned above, 85 percent of the doctors felt that they should be aware of their patients’ religious or spiritual beliefs, but only 31 percent felt that they should delve into these questions during routine office visits. However, more than twice as many physicians felt that discussing spiritual questions was more appropriate when patients are dying. A study published in the November 2000 issue of Oncology found that medical personnel (nurses as well as physicians) at a New York City cancer center who described themselves as religious were less subject than other practitioners to emotional exhaustion or “diminished empathy.”

Despite increasing interest in spirituality in medical settings, the physicians who discuss spiritual issues with patients are more the exception than the rule. The obstacles seem to be lack of time, lack of training (doctors aren’t taught how to approach and explore these subjects) and difficulty identifying patients who would welcome questions about their spiritual lives and beliefs. This is a sensitive area for both physicians and patients despite emerging evidence that spirituality can play a powerful role in healing. At the Arizona Center for Integrative Medicine that I direct at the University of Arizona in Tucson, physicians are trained to take “spiritual inventories” of patients as part of their medical history, to pray with patients when appropriate, and to make recommendations for their spiritual needs.