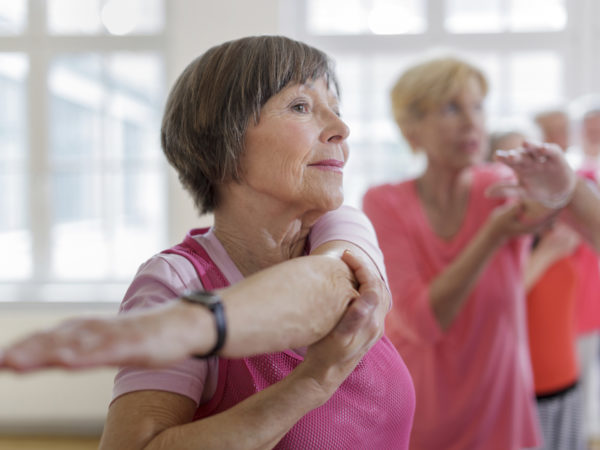 I’m a big proponent of yoga. It is an excellent muscle toner that helps balance all parts of the body, including your internal organs. It increases flexibility, is an effective preventive practice for anyone with chronic back pain and is beneficial for the nervous system, promoting deep relaxation and reduction of stress.

Questions about whether yoga is safe and effective for people with arthritis were addressed with some encouraging answers from a Johns Hopkins study. The investigation is believed to be the largest randomized trial to explore the effect of yoga on physical and psychological health, as well as quality of life in arthritis patients. Researchers enrolled 75 individuals who had either osteoarthritis of the knee or rheumatoid arthritis. They randomly assigned the participants to either a “waiting list” or eight weeks of yoga practice consisting of classes twice a week, plus a weekly practice session at home.

After the eight weeks, compared to those in the “waiting list” control group, the patients who performed yoga reported a 20 percent reduction in pain, increased energy levels, and improved mood and physical function, including ability to perform tasks at home. All of these benefits were still evident nine months later.

The investigators also reported measuring better walking speed in the yoga group but this was not as impressive as the other benefits. They saw little difference between the two groups in tests of balance and upper body strength.

The researchers noted that many health professionals have concerns about how yoga might affect vulnerable joints. Before joining the study, the participants were screened by their own doctors, and their physical and mental well-being was assessed by the Hopkins researchers. The instructors were experienced yoga therapists who received additional training so that they could modify poses to accommodate individual abilities. Participants continued to take their arthritis medicationS throughout the study.

These new findings are good news for people with arthritis. It’s estimated that up to 90 percent of arthritic patients are not as active as health guidelines suggest they should be to best manage their condition. The Hopkins researchers noted that uncertainty about how to remain active, not solely pain and stiffness, may explain why so many people with arthritis avoid physical activity. They have drawn up a checklist for doctors to make it easier for them to safely recommend yoga to their patients.

If you have arthritis and are considering yoga, be sure to talk to your doctor about your most vulnerable joints and be prepared to make modifications to poses. Also make sure that your yoga instructor is aware of your limitations.