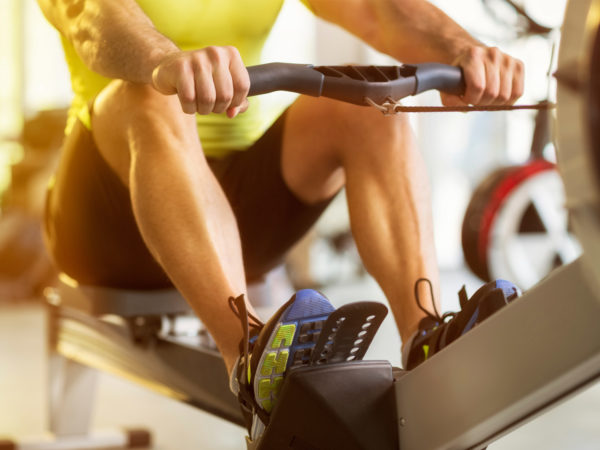 You’re likely referring to results of a study from Canada’s McMaster University showing that you can get an effective workout in 10 minutes, provided that one of those minutes is “all-out” very high intensity exercise.

For some time, the McMaster team has been researching the effects of interval training – high intensity exercise spelled by intervals of lighter effort. Now, they may have come up with an answer for people who avoid exercise because of time constraints. Here’s the story:

The team recruited 27 sedentary young men and randomly divided them into three groups. The first group was assigned to act as controls by changing nothing about their non-existent exercise regime. The men in the second group agreed to exercise moderately on stationary bikes for 45 minutes three times a week. Those in the third group did the interval training. Their workout consisted of a two- minute warm-up on a stationary bike, then pedaling all out, as fast as they could for 20 seconds before slowing down for 2 minutes. Then they did another intense 20-second sprint, followed by two minutes of slow pedaling. Lastly, they resumed sprinting for 20 seconds and then cooled down for three minutes. The entire workout lasted 10 minutes, but the men spent a total of only 1 minute pushing themselves as hard as they could in the 20 second increments. Like the other group of cyclists they worked out three times a week for 12 weeks.

Before the trial began, the researchers evaluated the volunteers’ aerobic fitness and the ability of their body to use insulin properly to regulate blood sugar levels.

Afterward, when they compared the fitness and health of the men in the interval group with those who performed the traditional 45-minute workout, the researchers found similar improvements. These included increased endurance of more than 19 percent, significantly reduced insulin resistance, as well as positive changes in muscle, reflecting increased energy production and oxygen consumption.

This study was larger and was conducted over a longer timeframe than earlier investigations of the effects of interval training, and unlike earlier studies, this one included a comparison group.

If you’re looking to cut back on the time you devote to exercise but don’t want to lose out on the health and fitness benefits, interval training might be your answer. And if you have been avoiding exercise entirely because of the time commitment involved, 10 minutes 3 times a week shouldn’t be a major sacrifice – if you’re willing and able to push yourself as hard as you can for a total of one minute. Bear in mind that the men in the McMaster study were in their 20s and 30s. (The researchers plan to study the effects of interval training in women soon.) If you want to try interval training, I suggest starting out at a gym under supervision.