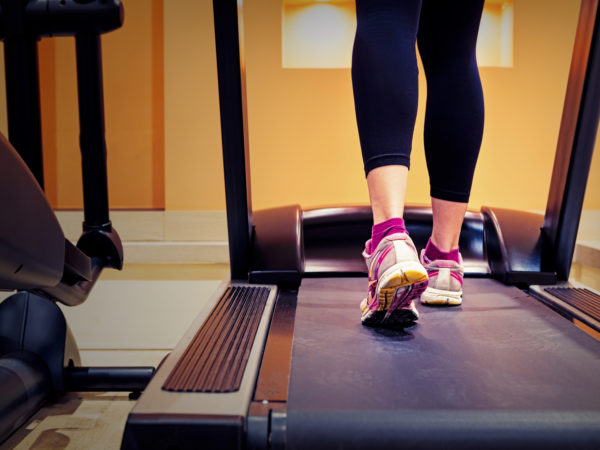 According to the New York Times, the first treadmill desk was created in 1996 by a psychology professor at the University of California, Berkeley. But the idea began to catch on only after a Mayo Clinic endocrinologist, James Levine, M.D., devised and tested a treadmill desk in 2005 and calculated that walking while you work at a slow steady pace (less than two miles per hour) can burn 100 to 130 calories per hour. That can add up to a lot of calories if you spend several hours a day at it.

The Mayo Clinic treadmill desk idea appears to have grown out of studies there on “nonexercise activity thermogenesis” (NEAT), which showed that lean people tend to be more restless than heavy ones and spend about two more hours a day on their feet – standing, pacing, and fidgeting – than heavy people. The investigators reported that this NEAT exercise can add up to burning about 350 calories per day, enough to result in weight loss of 30 to 40 pounds a year.

I don’t know how widely treadmill desks have caught on, or if those who try them in order to lose weight stick with this change of pace long enough to lose unwanted pounds and keep them off.

A good friend tried a brand of treadmill desk known as “TrekDesk” recently and found it “easier to use than I anticipated.” The desk is designed to straddle a treadmill that is supplied by the user. He says he was able to type fairly easily; resting the heels of his hands on the desktop kept his fingers steady, so he was able to use his keyboard at his regular speed. He is considering a TrekDesk for office work, but is also experimenting with a stand-up desk:  Standing burns more calories than sitting, but not as many as walking.

I’m in favor of anything that increases the motivation to get you up and moving regularly. If you have trouble fitting exercise into your daily routine, a treadmill desk may be the answer if you’ve got an office set-up that will allow for it. If not, you could try one at home to see if using it regularly for an hour or two while you’re on the computer makes a difference in your weight.