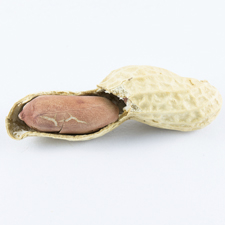 A new study from the University of Maryland does show that the thin, brown skins of peanuts are a mixed bag, as they may inhibit the growth of both beneficial and harmful microbes in the gut. The investigation also showed that peanut skins promote the growth of the harmful bacteria E. coli and Salmonella.

However, the same study found that eating peanuts without their skins is good for your microbiome, the collective term for the 100 trillion microbes – bacteria, viruses, and fungi – that live upon and (mostly) within us. The researchers reported that peanuts improve our gut biota’s ability to fight off E. coli. and Salmonella. We already know that peanuts (and peanut butter) contain heart-healthy monounsaturated fats.

In the course of the study, the University of Maryland researchers found that flour made from peanuts (minus their skins) contributed to the healthy growth of Lactobacillus casei, a "friendly" bacteria that can help vanquish harmful bugs. They further showed that after 48 hours in the presence of the peanut flour, E. coli growth was reduced by nearly 10 times. The study team also demonstrated that exposure to peanut skin extract reduced the growth of Listeria (another bad bug) more than 10 times in 24 hours. On the downside, peanut skin extract significantly reduced the growth of beneficial Lactobacillis, leading to increased growth of harmful E. coli and Salmonella.

Peanuts are really legumes, not true nuts, but if you love them, there’s no reason why you shouldn’t continue to eat them – and peanut butter – in moderation. We do need to know more about the effects of peanut skins on the microbiome before deciding whether or not to eat them.

I prefer almond butter and cashew butter to peanut butter, because they have a better fatty acid profile. And for snacking, I tend to choose raw, unsalted cashews, almonds or walnuts (an omega-3 source). If you do enjoy peanut butter, look for brands containing only peanuts or peanuts and salt. Avoid those with hydrogenated oils, sugar and other additives.