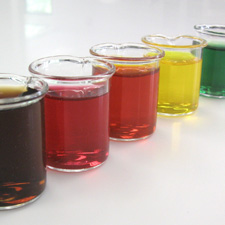 The ingredients you ask about are artificial colorings, which I believe you should always avoid. The chemicals used to create color are energetic molecules, many of which are capable of interacting with, and damaging, DNA. Anything that affects DNA can injure the immune system, accelerate aging, and increase the risk of cancer. Indeed, many synthetic food dyes once considered safe have turned out to be carcinogenic. Some currently approved for use in Europe are considered unsafe in the United States, and vice versa.

The latest news on the safety of food coloring was released by Consumer Reports in January, 2014. The magazine zeroed in on the caramel color added to soft drinks to turn them brown and reported "some types of this artificial coloring contain a potentially carcinogenic chemical called4-methylimidazole, (4-Mel). Under California’s Proposition 65 law, any food or beverage sold in the state that exposes consumers to more than 29 micrograms of 4-Mel per day is supposed to carry a health-warning label." In the Consumer Reports tests, "each of the 12-ounce samples of Pepsi One and Malta Goya (a soft drink, akin to nonalcoholic beer) had more than 29 micrograms" of 4-Mel per can or bottle. All told, a dozen different brands of soft drinks out of 81 tested contained 4-methylimidazole, some at higher-than-29 micrograms per serving.

In response to these findings, the FDA announced plans to look into the safety of caramel colorings but did not recommend that consumers "change their diets because of concerns" about 4-methylimidazole. In February 2011, the Washington based Center for Science in the Public Interest (CSPI) petitioned the FDA to ban 4-Mel and another caramel coloring component, 2-methylimidazole, stating that government studies showed these products "caused lung, liver, or thyroid cancer or leukemia in laboratory mice or rats."

The 4-Mel issue is just the latest skirmish on the subject of food colorings. Some have been associated with hyperactivity in children, allergic reactions, and cancer in animals. CSPI has asked the FDA to ban the use of the food colorings linked to hyperactivity (Yellow 5, Red 40 and six others made from petroleum). Indeed, the FDA has said that "for certain susceptible children with Attention Deficit/Hyperactivity Disorder and other problem behaviors…the data suggest that their condition may be exacerbated by exposure to a number of substances in food, including, but not limited to, synthetic color additives."

Meanwhile, the British government and European Union have acted to substitute natural colorings for the synthetic ones used in the U.S. because of concerns about a link to hyperactivity in children.

Luckily, food colorings are some of the easiest additives to avoid. Watch out for labels listing any of the following terms: "color added," "artificial color added," "U.S.-certified color added," or "FD&C red No. 3" (or green or blue or yellow followed by any number; these are FDA-approved food drug and cosmetic dyes). And try to convince your kids that garishly colored snack foods look weird rather than attractive and that they are unhealthy.

I have no objection to foods dyed with natural colors obtained from plants. The most common of these, annatto, is from the reddish seed of a tropical tree. It is widely used in Latin American cooking to make yellow rice and breads, and is also commonly added to butter and cheese to make them yellow or orange. Other safe food colorings are a red pigment obtained from beets, a green one from chlorella (freshwater algae), and an orange one from carrots.

Sources:
Consumer Reports, "Caramel color: The health risk that may be in your soda," February 10, 2014, http://www.consumerreports.org/cro/news/2014/01/caramel-color-the-health-risk-that-may-be-in-your-soda/index.htm, accessed April 9, 2014