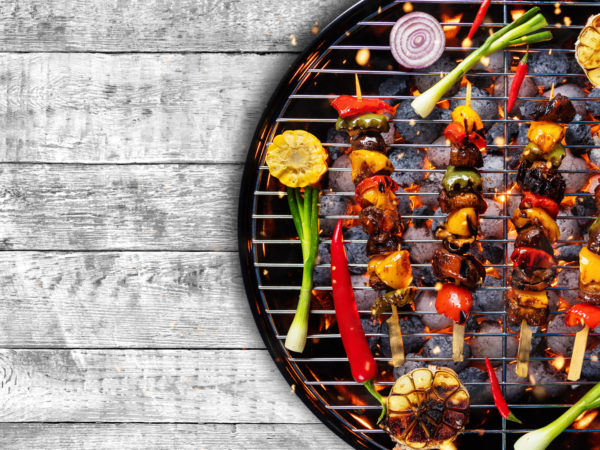 Your family probably won’t thank you for looking into the health issues surrounding barbecuing, but in no way does the typical all-American cook-out qualify as a healthy meal. In the first place, there’s the potentially carcinogenic smoke produced when you grill hot dogs, hamburgers and chicken over charcoal. Switching from charcoal to a gas or electric grill can eliminate the smoke hazard. If you do use charcoal, avoid using lighting fluid or self-lighting packages of charcoal briquettes – both add residues from toxic chemicals to food.

Then there are heterocyclic amines (HCAs) that are formed when meats are cooked at very high temperatures until they char. There is evidence indicating HCAs are carcinogenic. Researchers from the National Cancer Institute found a link between the risk of stomach cancer and cooked meats – those who ate beef medium-well or well-done had three times the risk of those who ate beef rare or medium-rare. They also found that people who ate beef four or more times a week had more than twice the risk of stomach cancer than those consuming beef less often. There is also evidence that a high intake of barbecued meat is associated with an increased risk of developing colorectal, pancreatic and breast cancer. (The same goes for well-done and fried meats.) HCAs form on chicken and fish as well as beef.

You may be able to reduce some of the risks of barbecuing meat by precooking it and just finishing it on the grill. Marinating meats (particularly chicken) may also reduce HCA formation (use garlic, ginger and especially, turmeric in the marinades).

Another trick to reduce the formation of HCAs on hamburgers is to combine the meat with cherries. In addition to reducing HCA formation, the cherries also retard spoilage – and give you some extra antioxidants. Use tart cherries, not sweet ones. The ratio should be about 90 percent meat and about 10 percent chopped up cherries. Sounds weird, but it works, and hamburger lovers say the flavor is fine.

On the positive side of the barbecue, you may induce your family to eat more vegetables if you marinate them and cook them on the grill. You don’t have to worry about HCAs because they don’t form on vegetables. Use onions, carrots, mushrooms, zucchini, red and green peppers and eggplant slices. Thread them on a skewer and let them sizzle on the grill until they’re tender and begin to brown. Or if you do eat meat, reduce the amount by adding vegetables in the form of kebabs.