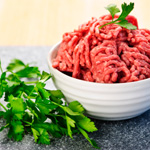 "Pink slime" is the unofficial term for an unappetizing product technically known as "lean finely textured beef," a mish-mash of slaughterhouse remnants including beef scraps, connective tissues, and other trimmings that are ground up, spun in a centrifuge to separate out fat, treated with ammonium hydroxide gas to kill harmful bacteria, and added to ground beef as a "stretcher." Before meat processors discovered this more profitable use for these leftover bits of beef, they were relegated to dog food or used to make cooking oil. Reportedly, about 70 percent of the ground beef sold at supermarkets today contains pink slime.

The term "pink slime" is credited to Gerald Zirnstein, a former U.S. Department of Agriculture (USDA) scientist, who with his colleague Carl Custer turned whistle- blower to let consumers know what they are paying for. The two former USDA scientists claim – rightly, I think – that if this filler is mixed in with the ground beef sold to consumers in supermarkets, the labels should say so. And they argue that because the stuff is not nutritionally equivalent to the beef to which it is added, the practice of using it amounts to economic fraud.

Beyond that, pink slime apparently isn’t as safe as the USDA and the manufacturer would like us to think. In 2009 the New York Times reported that government and industry records it obtained showed that "in testing for the school lunch program, E. coli and Salmonella pathogens have been found dozens of times in (the manufacturer’s) meat, challenging claims by the company and the USDA about the effectiveness of the treatment. Since 2005, E. coli has been found 3 times and salmonella 48 times, including back-to-back incidents in August (2009) in which two 27,000-pound batches were found to be contaminated. Fortunately, the meat was caught before reaching lunch-room trays."

The widespread use of this stuff most recently came to public attention when chef Jamie Oliver began campaigning against it. As a result, McDonald’s, Burger King and Taco Bell have announced that they would remove "pink slime" from their products. However, the Agriculture Department still buys millions of tons of it for use in school lunches. (In March 2012 the USDA did announce that schools participating in the national school lunch program can opt to not receive meat containing pink slime.)

Pink slime is produced by only one company, Beef Products, Inc. (BPI), of Dakota Dunes, South Dakota, which successfully persuaded government officials that consumers don’t need to be told on product labels that the ground beef they buy contains bits of the cow they probably wouldn’t want to eat. In response to increased consumer awareness, BPI suspended operations at three of its plants, and one of the companies that uses the product and supplies ground beef to several major retailers and fast-food chains has filed for Chapter 11 bankruptcy.

If you use ground beef and want make sure what you buy contains no pink slime, choose organic versions. Meanwhile, Costco, Publix, Whole Foods, H-E-B, Tops, A&P, and Target announced that they never sold beef with added pink slime, and at this writing a number of large retail chains including Giant Food Stores, BJ’s Wholesale Club and Kroger Co. are now pledging that they will not sell meat containing the questionable additive.

If you use ground beef and want make sure what you buy contains no pink slime, choose organic versions.