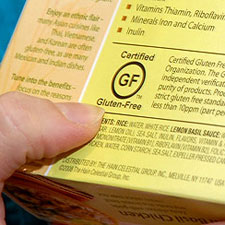 Celiac disease, also known as celiac sprue or gluten-sensitive enteropathy, is an inherited, autoimmune disorder that results in damage to the small intestine when the diet contains gluten, the protein in wheat that makes dough elastic. Gluten is also found in rye, barley, and oats. Celiac disease affects up to 3 million Americans and can cause a long list of symptoms both within and beyond the gastrointestinal tract. These include recurring abdominal bloating and pain, chronic diarrhea, foul-smelling, fatty or discolored stool, weight loss, anemia, bone pain, fatigue, and in children and infants, delayed growth and failure to thrive.

The only reliable and effective treatment for celiac disease is a gluten-free diet – for life. Eating even a small amount of this protein can result in damage to the intestine. You have to avoid all foods containing wheat, oats, barley and rye.

On August 5, 2013, the FDA published a new regulation defining the term "gluten-free" for voluntary food labeling. FDA Commissioner Margaret A. Hamburg, M.D. said that the new labeling regulation will provide a uniform standard definition to help people with celiac disease make food choices with confidence. It requires that food labeled "gluten-free" contain less than 20 parts per million (ppm) of gluten, which the FDA states "is the lowest level that can be consistently detected in foods using valid scientific analytical tools." The statement continues: "Most people with celiac disease can tolerate foods with very small amounts of gluten. This level is consistent with those set by other countries and international bodies that set food safety standards."

The new definition standardizes the meaning of "gluten-free" claims across the food industry. The FDA also will require that foods labeled "no gluten," "free of gluten," and "without gluten" meet the new definition for "gluten-free." It gave food manufacturers a year to bring their labels into compliance with the requirements.

The FDA action should make it easier for people with celiac disease to shop for food. However, it doesn’t affect foods that are not labeled "gluten-free," so you still must check labels carefully. Gluten can turn up where you don’t expect it: in cold cuts, soups, candies, and even soy sauce. Look for ingredients such as starch, modified food starch, hydrolyzed vegetable protein (HVP), hydrolyzed plant protein (HPP), texturized vegetable protein (TVP), binders, fillers, excipients, extenders, malt, and natural flavorings, all of which may indicate the presence of gluten.

Until the FDA formulated the new rule, there were no federal standards or definitions for the food industry to use in labeling products "gluten-free."  According to the FDA, an estimated five percent of foods currently labeled as if they are free of gluten contain 20 ppm or more of the protein.