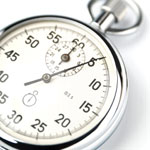 The five-second rule has been around a long time. The truth is that any food that falls on the floor is quickly contaminated with whatever dirt and bacteria it lands on. The extent and seriousness of the contamination depends more on the type of food and on the type and number of germs on the floor than how long it is out of hand. Typically, you have to ingest 10,000 harmful bacteria or more to get sick, but fewer can do the job; the infectious dose of some types of salmonella is 10; fewer than 100 of some strains of E. coli can be fatal.

The five-second rule has been studied scientifically, first by Jillian Clark, an enterprising high school student who was an intern at the University of Illinois in 2003. She began by conducting a survey to find out how well known the five-second rule is and how many people use it and found that more than half the men and 70 percent of women she surveyed were familiar with the rule and that many of them followed it.

Ms. Clark then set out to test how quickly food dropped on the floor becomes contaminated. She started by dousing ceramic tiles with E. coli. Then she put gummy bears and cookies on the tiles and picked them up within five seconds. When she checked the candies and cookies for the bacteria, she found that all had been contaminated.

Later, a team of researchers from Clemson University put salmonella on tile, wood flooring and nylon carpet to test how long it takes for slices of bread and bologna to become contaminated after being dropped on the three different surfaces. First, they determined that 24 hours after they put the salmonella on the floor surfaces, thousands of bacteria remained alive on the wood floors and tiles; tens of thousands were alive on the carpet. Then they dropped the slices of bread and bologna on the surfaces. Those left on the floors for only five seconds picked up 150 to 8,000 bacteria. Food left on the floor for a full minute picked up considerably more organisms from wood surfaces, and 10 times more than that from the tile and carpeted surfaces. The study was published in the April 2007 issue of the Journal of Applied Microbiology.

If you continue invoking the five-second rule, odds are that you won’t get sick. In addition, if you accept the hygiene hypothesis, as I do, you may be less concerned about all this. Regular, moderate exposure to ordinary dirt and germs may strengthen the immune system and reduce risks of asthma, allergies, and other chronic illnesses. But bear in mind that any food that hits the floor (or any other unclean surface) is going to pick up unseen bugs no matter how quickly you snatch it up. I wouldn’t eat anything that fell on a hospital or sickroom floor or other surface likely to harbor really dangerous organisms.