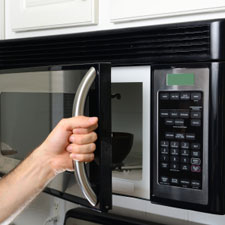 In yoga and macrobiotic dietetics, it is considered unhealthy to reheat foods because of potentially damaging effects on its "energy."  But I know of no medical reason why reheating food more than once would be unsafe.

You should always be concerned about bacterial growth, however, especially when you leave certain cooked foods, like beans, meats, fish, and egg-containing dishes, sitting on a dining table or kitchen counter for two hours or longer before refrigerating it. The two-hour mark is generally considered the point at which bacteria will begin to grow in unrefrigerated, perishable food, although that may be erring on the side of safety. The U.S. Food and Drug Administration, which regulates commercial food production, specifies that cooked foods should sit out for no more than four hours at temperatures between 41 degrees to 135 degrees, the range in which bacteria can grow and multiply. After that, the FDA advises refrigeration. The U.S. Department of Agriculture (USDA), which advises consumers on these matters, says not to leave prepared foods in the bacterial growth zone for longer than two hours (except on hot summer days, when you should cut that time to one hour).

While researching your question, I came across an article on reheating foods published in the New York Times in 2011. The Times was examining the views of cookbook author and chef Michael Ruhlman, who had written on his blog that when he makes chicken stock, he leaves it in the stockpot on the stovetop for about a week and uses some of it daily in other dishes. Ruhlman maintained that the original cooking would have killed any bacteria in the stock.

The Times then consulted independent food scientist and educator O. Peter Snyder, Jr., who viewed Mr. Ruhlman’s practice as asking for trouble. To get rid of any active bacteria in the stock, Dr. Snyder said it should be boiled for a minute at 150 degrees or above. To inactive botulism toxin that can form in unrefrigerated food, the stock would have to be boiled for 10 minutes.

The Times writer then went back to Mr. Ruhlman who amended his earlier remarks: "I agree that I should have been clearer about the importance of the ‘kill step,’ a good 10 minutes at the boil." Boiling kills any bacteria active at the time, including E. coli and salmonella, but as the article in Times noted, a number of survivalist species of bacteria are able to form resistant spores that can survive boiling temperatures and then germinate after the liquid returns to a temperature hospitable for their growth.

Harold McGee, the noted food scientist who wrote the article, says he finds it impractical to rush to refrigerate perishable food during a dinner party or backyard barbecue. He uses the four-hour mark, and Dr. Snyder agrees that four hours after cooking "is plenty fast enough to get food into the refrigerator."

My personal take on reheating has to do with taste. I think that some soups and stews and bean dishes actually get better with repeated reheating. But I always refrigerate them between meals.