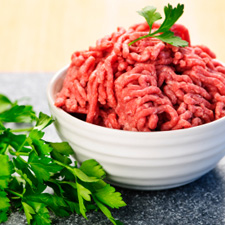 Increasing the amount of red meat you eat can, over time, raise your risk of type 2 diabetes, according to the results of a study that looked at the eating habits of some 149,000 U.S. adults. Type 2 diabetes stems from the body’s inability to properly use insulin. The risk increases with age and higher percentages of body fat. African Americans, Hispanics, Native Americans, Asian Americans, Native Hawaiians and Pacific Islanders have higher than normal risk.

The latest findings on the red meat/type 2 diabetes connection comes from researchers at the National University of Singapore, who found that an increased intake of red meat over four years was associated with higher risk of the disease during the subsequent four years. The study defined "red meat" as unprocessed beef, pork, and lamb, as well as such processed products as bacon and sausages. The findings showed that eating processed meats posed more of a risk than consuming unprocessed meat.

While red meat consumption has long been associated with an increased risk of type 2 diabetes, the Singapore researchers noted that earlier studies haven’t looked at changes in eating habits over time. Their results showed that compared with those who made no changes in their intake of red meat during the course of the study, subjects who increased their consumption by more than half a portion per day raised their risk by 48 percent. On the flip side, the results showed that cutting red meat consumption by more than half a serving per day during the first four years of the study was associated with a 14 percent drop in risk of developing diabetes over the following 16 years compared to those whose intake of red meat didn’t change during the course of the study. The researchers considered low intake of red meat to be two servings per week, moderate intake to be two to six servings per week, and high intake to be seven or more weekly servings.

We know from earlier studies that Americans who eat a lot of red meat are also more likely to be sedentary, smokers, alcohol drinkers, overweight, and eat more calories and fewer plant foods – all lifestyle factors that increase the risk of type 2 diabetes. But we don’t know exactly what it is about red meat that bumps up the risk. This study was observational in nature, which means that while it shows an association between eating red meat and type 2 diabetes, it does not establish that consuming red meat actually causes the disease. The study was published online June 17, 2013 by JAMA Internal Medicine.

I don’t believe anyone needs to eat red meat to be healthy. We can get the protein and essential fatty acids we require from other food sources, such as wild-caught, cold-water fish; free-range, omega-3 rich eggs; and tofu, beans and nuts. If you do eat red meat, less is better than more, wild game and bison are better than beef, and grass-fed, grass-finished beef offers a far better omega-3 to omega-6 fatty acid profile along with fewer contaminants and less fat.