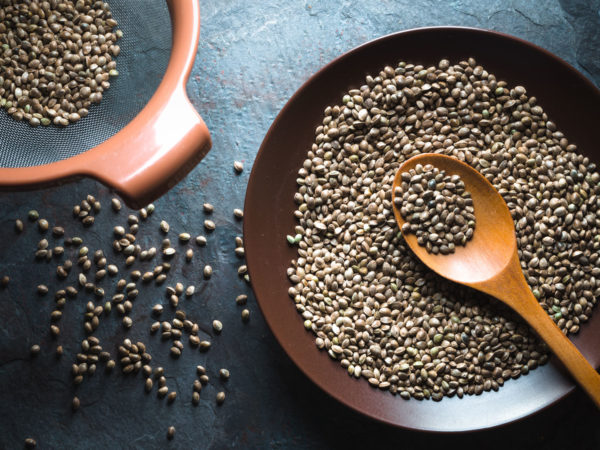 I’ll answer your last question first. No, you cannot get high – in other words, alter your state of consciousness – from eating foods containing hemp. Hemp is now used to make milk substitutes, bread, cereals, granola bars, beer and other products, and comes from the same plant (Cannabis sativa L) that provides marijuana, but the seeds contain only trace amounts of THC (tetrahydrocannabinol) the psychoactive component of hemp resin. Food products made from hemp seeds and their oil will not get you high or cause a positive reading on drug tests.

Hemp seeds have high levels of vitamins A, C and E and beta-carotene and are rich in protein, carbohydrates, minerals and fiber. What’s more, a recently published study from Spain’s University of Seville found that hemp has an ideal ratio of omega-6 to omega-3 fatty acids, in addition to providing some compounds thought to lower high blood pressure.

The Spanish analysis of hempseed oil revealed that it contains sterols, aliphatic alcohols and linolenic acids, including a-linolenic acid (ALA), an omega-3 fatty acid precursor that the researchers wrote may have “favorable nutritional implications and beneficial physiological effects on the prevention of coronary heart disease and cancer.”

Although hemp looks very promising nutritionally, we’ll need human studies to demonstrate the real-world health benefits of hemp foods. So far, there aren’t many clinical trials involving hemp in the U.S., but the decades-long prohibition against growing hemp in this country (without a DEA permit) may not last much longer, opening the way for more research. The farm bill signed into law by President Obama in February, 2014, contains an amendment to legalize hemp production for research purposes by state agriculture departments and colleges and universities in states that have already legalized industrial hemp farming.

The U.S. dominated the worldwide hemp industry until 1937, when it became illegal to grow hemp here, ostensibly because of its connection to marijuana. For more on hemp, its historic uses, agricultural promise (it may restore farm soil damaged by decades of practicing monoculture) and its potential to provide sustainable energy, I encourage you to read Hemp Bound, a newly published (March 2014), entertaining and informative book by Doug Fine.

I also recommend eating whole hemp seeds as a good source of protein, fiber, and omega-3 fatty acids. They’re delicious, and very easy to prepare. Just pour half a cup of seeds into a dry skillet placed over medium-high heat and stir them around until they begin to toast and pop. At that point, turn off the heat, stir in a teaspoon of olive oil and season with salt and pepper or a little soy sauce, red pepper, garlic powder or herbs and eat them as a snack. Prepare only as much as you can eat since the cooked seeds don’t keep well.