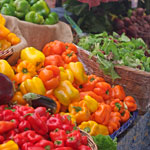 Foods that contain genetically modified organisms (GMO) have been with us since 1996, but most people are unaware that about 90 percent of the corn, soybeans, rapeseed (the source of canola oil) and sugar beets grown in the United States are GMO. These crops contain bacterial DNA that makes soybeans resistant to a weed killing herbicide and enables corn to produce its own insecticide. Those soybeans and corn end up in cereals, snack foods, salad dressings and other foods we regularly consume.

The ongoing battle over labeling is currently focused on the California referendum in which voters will get to decide the issue. In the past, the arguments have been debated only in state legislatures, where those in favor of informing the public about what their foods contain have been defeated.

The arguments for and against labeling are pretty obvious:

The advantages to farmers – lower production costs, fewer pest problems, reduced use of pesticides, and better yields compared to conventional crops – were spelled out in a 2010 report on GMO crops from the National Academy of Sciences. The report noted, however, that widespread cultivation of genetically modified crops resistant to the herbicide glyphosate used in many commercial weed killers could stimulate weeds to develop their own resistance to glyphosate. Another issue discussed in the report: GM crops produce a bacterial toxin (BT, from Bacillus thuringiensis) that is deadly when consumed by susceptible insect pests. Two insect species have already developed resistance to it. Organic gardeners are likely to lose this useful tool as pests become resistant; moreover, humans have never consumed BT in significant amounts, and long-term health effects are unknown.

To date, no identified food safety issues have emerged as a result of the consumption of foods that include products including these GM crops, but some experts say it’s too soon to observe any negative impact on human health.

Another issue: last year (2011) the Department of Agriculture deregulated a new alfalfa created by Monsanto over the protests of the organic farming industry. The concern is that alfalfa pollen drifts easily from one field to another and the GMO pollen could easily contaminate organic crops used to feed dairy cows that are the source of organic milk.

This issue is a complex one with many questions unanswered. For that reason, and certainly until the answers are clearer, labeling GMO foods makes sense to me.