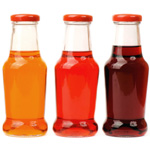 The news that Starbucks uses colorings made from crushed cochineal beetles made quite a splash. News accounts attributed the disclosure to a vegan barista who sent the ingredients list for Starbucks’ strawberries-and-cream frappuccino to a vegetarian blog in March of 2012. Carmine and cochineal are coloring agents derived from the bugs, which live on cactuses in parts of Latin America, South Africa and the Canary Islands, and are commonly used to add pink or red color to some foods including juices, the cherries in canned fruit cocktails, artificial crab meat, strawberry milk drinks, and some Dannon yogurts. The same colorings are also used in some cosmetics products.

In January, 2011 a new FDA rule went into effect requiring that carmine and cochineal extracts be included on the ingredients lists of products that contain them. In the past, these agents had been described on labels only as "artificial color." The reason for the rule change was that the FDA had received reports of allergic reactions, some life-threatening, to the proteins in the crushed bug bodies.

If you are a vegan or a vegetarian or just don’t want to eat an extract from bugs, you should avoid food products with labels listing "carmine," "cochineal" or "confectioner’s glaze" (an ingredient in the shiny coating of some candies).

As unappetizing as these beetle-derived food colorings may sound, they’re probably not as dangerous as synthetic food dyes. Those chemicals may interact with DNA to accelerate aging and increase the risk of cancer. Many synthetic food dyes once considered safe have turned out to be carcinogenic. Some approved for use in Europe are considered unsafe here and vice-versa.

Coloring is added to foods for the convenience of the manufacturer, not for the health of the consumer. Luckily, these are among the easiest types of food additives to avoid. Try to convey to your children that garishly colored snack foods are weird and unhealthy rather than attractive, and make it a rule not to buy them. Watch out for labels that list any of the following terms: "color added," "artificial color added," "U.S. certified color added," "FD & C red no.3" (or green or blue or yellow followed by any number; these are FDA-approved food, drug, and cosmetic dyes).

I have no objection to foods containing natural colors obtained from plants. The most common, annatto, is from the reddish seed of a tropical tree. It is widely used in Latin American cooking to make yellow rice and breads, and is also commonly added to butter and cheese to make them yellow or orange. Other safe food colorings are carotene from carrots (which may be listed as "carrot oil") a red pigment obtained from beets (listed as "beet juice") and a green one from chlorella (freshwater algae).