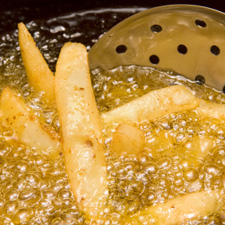 The problem has to do with a toxic compound called acrylamide. We first heard about acrylamide in 2002, when the Swedish National Food Administration (NFA) reported that it is formed in starchy foods that are baked or fried – such as French fries, potato chips, bread and cookies – and is carcinogenic in rats. Acrylamide does not form when the same foods are cooked in other ways, such as boiling, steaming or microwaving. On November 14, 2013, the FDA issued a "Consumer Update" suggesting that we stay away from foods and cooking methods known to form acrylamide, which develops when a sugar and an amino acid called asparagine combine during high-temperature cooking or heating for extended periods of time. At the same time, the FDA issued a nonbinding "draft guidance" for industry to get a discussion going about reduction of acrylamide in processed foods.

The FDA consumer update stated that the agency acted "because high levels of acrylamide have been found to cause cancer in animals and on that basis scientists believe it is likely to cause cancer in humans as well." To my knowledge, no study has yet proved that acrylamide is a human carcinogen. According to the American Cancer Society, since acrylamide was first found in certain foods in 2002, "Dozens of studies have looked at whether people who eat more of these foods might be at higher risk for certain cancers. Most of the studies done so far have not found an increased risk . . ."

When the acrylamide issue first arose in 2002, I didn’t see any great cause for alarm, for two reasons: One, if you’re on a healthy diet, you’re probably not eating a significant amount of fried foods and processed baked goods. Secondly, you have to maintain perspective about foods that cause cancer in rats. Most are not human carcinogens. For example, compounds in such foods as apples, apricots, bananas, broccoli, cabbage, cherries, and chili peppers (to name a few) have been shown to cause cancer in rodents. Yet fruits and vegetables do not raise the risk of cancer among humans – they reduce it.

The FDA Consumer Update listed tips for cutting down on acrylamide. I believe most of them apply to individuals whose diets are not as healthy as they should be, but for the record, here’s what the FDA suggests:

If you’re following a healthy diet, there’s not much reason to worry about the acrylamide in an occasional indulgence in French fries, cookies and the other foods mentioned by the FDA. If you eat those foods regularly, you should be more concerned about all the unhealthy oxidized polyunsaturated fat and refined starch in them, which are likely greater threats to health than the amounts of acrylamide they may contain.