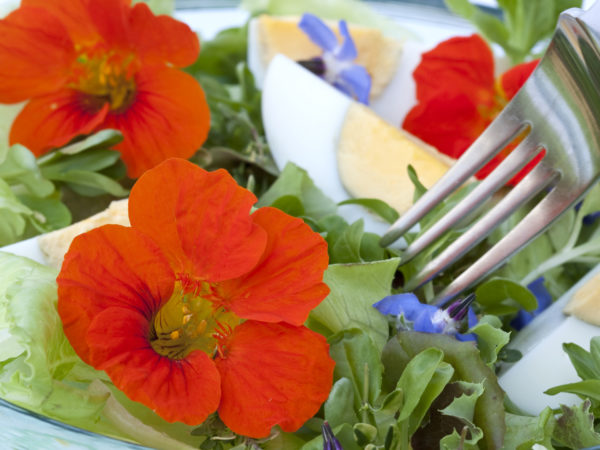 Foraging – searching for food that grows naturally in wild or neglected spaces – does seem to be a growing trend. Based on what I’ve read, the emphasis appears to be on finding edible weeds such as chickweed, mallow, prickly lettuce, and dandelion, plus many other weeds that used to be pulled out of gardens and discarded. Foraging in New York City has become so popular that there’s a $250 fine for those caught in the act in protected areas or while carrying purloined plants out of a park. In the past, foragers in parks were considered a rarity, but in 2011, the New York Times reported that they are now “an eclectic bunch, including downtown hipsters, recent immigrants, vegans and people who do not believe in paying for food.”

Foraging requires some know-how. You just can’t pull up assorted weeds and toss them into your salad. You need to know what plants are edible, what they should taste like, whether or not a weeded area has been sprayed with an herbicide, and whether or not it is a spot where dogs habitually urinate. You also have to learn beforehand which plants belong on your plate and which ones can be dangerous, even deadly. For example, poison hemlock and wild carrot look similar; you might enjoy munching on one, but consuming the other could kill you. There are a number of books and websites on foraging that provide information on what plants are edible, what they taste like, which part of the plant can be eaten, the best time of year to harvest, and which ones to avoid.

New York City now has a restaurant that features foraged food. While this type of dining spot is new to New York, Chef Douglas Monsalud of Foragers City Table notes that Chez Panisse in Berkeley, Calif., had a staff forager as long ago as the 1970s and that today a number of Bay Area restaurants have followed suit.

If you have a garden, you may want to take a second look at some of the weeds you usually pull and toss. To find out whether any are worth eating, you can post a photo on the website Meadows and More for identification by a professional plant expert. This site also has information about what is best for foraging at various times of the year, nutritional content of commonly foraged plants and recipes to prepare them.

Many plants maligned as weeds can add new tastes and flavors to our plates. Even better, you may enjoy a nutrient bonanza. A National Public Radio report on foraging quoted wild greens expert John Kallas, Ph.D. as saying they are generally more nutritious than the spinach and lettuce found in supermarkets. He noted that one weed, mustard garlic, has the highest levels of micronutrients (including vitamin A, beta carotene, zinc, manganese and fiber) of any leafy green analyzed.