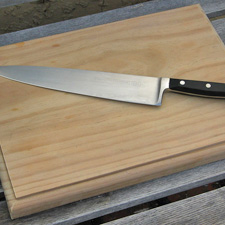 Cutting board safety has been a topic of debate for some time. The main question has been which material is best – wood, plastic or, more recently, bamboo. Safety concerns focus on whether or not a board can be effectively cleaned after use so that few bacteria remain to contaminate whatever food you place on it next. Another consideration is which surface is more likely to dull the knives you use.

Research at the University of California, Davis (UCD), addressed these issues after investigators learned that the U.S. Department of Agriculture (USDA) had no scientific evidence to back up its recommendation that plastic, rather than wood cutting boards, be used in home kitchens. However, at the time, the USDA’s Meat and Poultry Inspection Manual and the FDA’s 1999 Food Code, which set regulations for restaurants and retail food stores, permitted the use of cutting boards made of maple or other close-grained hardwood and didn’t authorize plastic boards or specify how plastic surfaces should be maintained.

The UCD researchers initially set out to find a way to disinfect wooden cutting boards so they would be as safe to use at home as plastic ones were said to be. They soon learned that disease-causing bacteria such as E. coli and Salmonella couldn’t be recovered from new wooden boards even shortly after they were put there. The bacteria were essentially unviable unless the researchers contaminated the boards with very large numbers of the bugs. Surprisingly, they also found that new plastic surfaces enabled the bacteria to persist.

But here’s another surprise: the researchers quickly discovered that used, knife-scarred wooden cutting boards harbored no more bacteria than new boards, while knife-scarred plastic boards were "impossible to clean and disinfect manually." When the researchers scanned the plastic boards with electron micrographs, they saw "highly significant damage" to the surfaces from knife cuts. Bacteria inside wooden boards don’t multiply and gradually die. Comparing the bacteria found on wooden boards to those found lurking on plastic ones when both have been cleaned manually, the researchers found more bacteria on a used plastic surface than on a used wood one.

The good news from this study is that plastic boards can be successfully cleaned in the dishwasher, and that small wooden boards can be disinfected quickly in the microwave.

The UCD team noted that a study from another group of researchers examining salmonella infection found that people using wooden cutting boards at home were less likely to contract these infections, while those using plastic (or glass) cutting boards were more likely to become infected.

I’m currently using a bamboo cutting board. It is low maintenance and the wood is hard enough to resist retaining water (but don’t put bamboo in the dishwasher). I wash my cutting board after use, rinse it and wipe it dry. Once a month, I rub it with mineral oil to protect the surface.