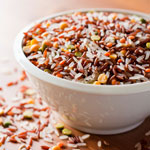 You’re referring to a study from Consumer Reports, as well as one underway at the FDA on the amounts of arsenic in rice. The Consumer Reports data was made public in advance of its November 2012 issue, which gives the results of tests on more than 200 samples of rice products. The research team found measurable levels of both inorganic arsenic, a carcinogen, and organic arsenic, considered less of a health threat, in many rice-based foods including organic rice baby cereal, rice breakfast cereals and both brown and white rice. Consumer Reports also analyzed federal data on rice consumption and concluded that individuals who eat rice regularly have arsenic levels 44 percent higher than those of people who don’t.
The FDA study is not yet complete, but the agency has revealed that results of tests on the 200 rice products it has analyzed so far show average levels of inorganic arsenic to be 3.5 µg to 6.7 µg per serving, which the agency says is consistent with the Consumer Reports findings. The FDA intends to test a total of 1,200 rice products and anticipates finishing its study by the end of 2012.

The background to these two studies are two earlier ones published in 2010 and 2011 that identified rice as a source of arsenic exposure in the U.S; another found significant arsenic concentrations in energy bars and baby foods sweetened with brown rice syrup. Arsenic occurs naturally in both soil and water, and amounts found in food may also come from pesticides and fertilizers.  While arsenic is also present in some fruits and vegetables, rice has higher levels than other crops because it is grown in water and absorbs arsenic from both soil and water more effectively than other plants.

The U.S. Environmental Protection Agency (EPA) notes that exposure to high levels of arsenic can raise the risks for both cancer and heart disease. We also know that children who get too much arsenic from food may have lower IQs and poorer intellectual function than other kids. We don’t know, however, whether accumulations of small amounts of arsenic from rice and other foods over time will lead to long-term health consequences.

The EPA has found no safe level of exposure to inorganic arsenic, and no federal limits have been set on the amount of arsenic permitted in most foods. However, the maximum amount of arsenic allowed in public drinking water supplies is 10 parts per billion (ppb), twice the five parts per billion (ppb) originally proposed by the EPA. Only the state of New Jersey has adopted the five ppb standard.

Consumer Reports used five ppb as the standard in its study and found that a single serving of some brands of rice contains almost one-and-a-half times the amount of inorganic arsenic an adult would get from drinking one liter of water. Some of the infant rice cereals tested had levels of inorganic arsenic that were at least five times the amounts found in oatmeal and other cereals.

Consumer Reports is urging the federal government to set limits for arsenic in food and has suggested that parents limit infant rice cereal to one serving per day and not give rice milk to children under five. It also recommends that adults eat no more than two servings of rice per week. This sounds drastic. I would like to see research on arsenic levels in people who eat rice regularly, including populations in Asia who eat it at every meal. I also would like to see comparisons of organic versus conventional rice.