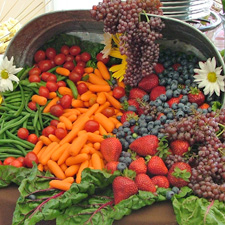 You raise a good question. Clearly, inspectors from the U.S. Department of Agriculture (USDA) can’t be present everywhere to verify that farmers, processors and handlers of organic foods all over the U.S. and throughout the world are meeting the USDA’s organic standards. But somebody has to do it. As a result, producers of organic foods here and abroad must hire independent companies to inspect facilities and test their products for pesticides so that they can be certified as organic. In turn, the USDA audits the certifiers’ work.

The subject of imported organic food being questionable has been in the news recently because of a book published in 2014 – Organic: A Journalist’s Quest to Discover the Truth Behind Food Labeling – by Peter Laufer, a professor of journalism at the University of Oregon. A self-described skeptic, Laufer was suspicious of fraud in the world of imported organic food and decided to investigate. He started out by trying to track a can of organic beans from Bolivia and a package of organic walnuts from Kazakhstan. In an NPR interview, Laufer recounted flying to Bolivia to trace the source of his organic beans and being able to confirm that they did come from an organic farm. The walnuts proved more elusive since he was unable to find any others from Kazakhstan on the market and a USDA investigation found no evidence of walnut production there. He remains a skeptic on the subject but was unable to find hard evidence of fraud in the organic market.

You should be aware that the concept of organic farming did not originate in the U.S. and has a longer history elsewhere in the world. According to the Organics Institute, an Australian agency, until the 1920s almost all agriculture used methods that would now be considered organic.

That changed with World War II, when research on chemicals designed as nerve gases showed they could also kill insects. The modern organic movement started in Europe in the 1920s, when a group of farmers and consumers sought alternatives to the industrialization of agriculture they observed going on around them. In the U.S., a major catalyst was the 1962 publication of Rachel Carson’s BOOK, Silent Spring, in which she criticized the indiscriminate use of pesticides. Her arguments led to the banning of DDT.

Regarding imported organic foods, it’s unclear what share of the U.S. organic market they represent. Ted Jaenicke, an associate professor of agricultural economics at Penn State, noted that a 2009 survey of U.S. food retailers found that 29 percent had discontinued an imported organic product because of consumer concerns over geographic origin. Dr. Jaenicke also cited the USDA’s National Organic Program as reporting 23 cases of fraudulent organic certificates on organic food between February 11, 2011, and June 7, 2013. Nine of the 23 cases involved Chinese companies.

Unfortunately, there have been cases of fraud in the U.S., too. Disheartening though that is, I still think it’s wise to choose certified organic products over conventional ones that we know carry residues of pesticides and other agrichemicals that can’t be good for us.