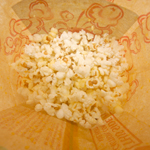 You’re probably referring to a study from the University of Toronto showing that chemicals used to line junk food wrappers and microwave popcorn bags (to make them greaseproof) can migrate into food and contribute to chemical contamination of human blood. This study isn’t the first to look into this issue.

When investigators from the U.S. Centers for Disease Control and Prevention (CDC) measured levels of the chemical perfluorooctanoic acid (PFOA) in the blood of more than 2,000 individuals aged 12 and older in the United States, they found traces of the compound in nearly everyone tested.

In addition to their use in greaseproof food wrappings, PFOA is used to manufacture Teflon and other stain-and stick-resistant materials including pizza boxes. Its presence in consumer goods has been a safety issue for some time. In June 2005, a scientific advisory panel to the U.S. Environmental Protection Agency (EPA) identified PFOA as a "likely carcinogen" but drew no conclusions as to whether products containing it pose a cancer risk to humans. Animal studies have identified four types of tumors in rats and mice exposed to PFOA.

I’ve been asked before about dangers presented by PFOA in the lining of microwave popcorn bags. Fortunately, that should cease to be a worry within a few years. In a 2009 agreement with the U.S. Environmental Protection Agency, eight U.S. companies, including DuPont, agreed to remove the chemical from their products (excluding Teflon) by 2015 and to reduce manufacturing emissions by 95 percent as of 2010.

The Toronto researchers exposed rats to polyfluoroalkyl phosphate esters (PAPs) an intermediate breakdown product of the compounds used in junk food packaging. For three weeks after exposure, they tracked concentrations of both the PAPs and further breakdown products of this chemical (including PFOA) in the animals’ blood. They used the PAP concentrations seen earlier in human blood and those seen in the rats to calculate human PFOA exposure from PAP metabolism.

The researchers determined that some of the chemicals seen in blood were from the fast food wrappers, but they weren’t able to determine whether this was the only source of exposure or whether the wrappers were the main source. According to the Environmental Working Group, a non-profit organization that advocates for environmental causes, PFOA is also found in products designed to repel soil, grease, and water, including carpet and furniture treatments; sprays for leather, shoes, and other clothing; paints, cleaning products, and floor wax.

To avoid any potential hazards of microwave popcorn bag linings, you can air-pop kernels and then flavor them, as I do, with a little tamari, some nutritional yeast, garlic powder and, sometimes, cayenne pepper. You can also avoid the PFOA in junk food wrappers by avoiding junk food, which is not good for you for many other reasons.