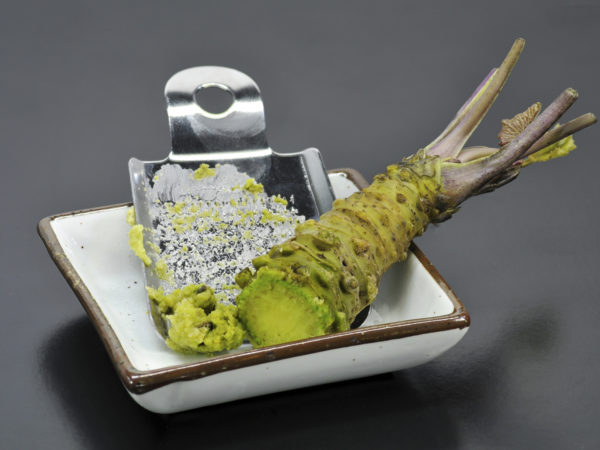 Wasabi is the common name of a plant (Wasabia japonica), its root-like stem (rhizome), and a popular condiment made from that root. A relative of mustard, the plant is part of the Brassicaceae family, which includes cabbages and horseradish. It originated in Japan, where it has been cultivated for more than 1,000 years.

It is very difficult to grow wasabi – it requires moist, shady areas, but not too moist or shady – and can be found naturally growing in mountain streambeds in Japan. Cultivated, wasabi is called “sawa,” when grown in semiaquatic conditions, and “oka” when grown in fields. Today it is cultivated in North America as well as Japan.

Because it is difficult to grow, true wasabi is expensive. That is why the green paste that accompanies sushi dishes in restaurants, even in Japan, is seldom true wasabi, but rather a mixture of horseradish, Chinese mustard and green food coloring. True wasabi paste looks and tastes quite different. Rather than a uniform green, it is a mix of coarse light-green and white particles, and its flavor that is more than just “hot” – it includes distinct vegetal and earthy notes.

Medicinally, wasabi has antibiotic properties, inhibiting microbial growth and suppressing oral bacteria. It may even have anti-cancer effects as well as mild anti-inflammatory activity.

Dr. Weil’s take on wasabi:
One of my proudest achievements as a gardener is successfully cultivating wasabi at my summer home in British Columbia. There is now a small but thriving industry of wasabi farmers in the coastal parts of Oregon, Washington and southwestern Canada, where the wet, cold conditions are ideal for growing this demanding crop. I hope that eventually, the dyed, lime-green “wasabi” that most people know becomes rare, and more Americans have a chance to enjoy the culinary and health benefits of the real article.

From a culinary standpoint, both the root and the leaves of the wasabi plant can be used: as mentioned above, the root can be grated and eaten as a condiment or grated over foods for added spice. Fresh wasabi leaves can be eaten, either fresh, pickled (to create a dish the Japanese call wasabi-zuke) or cooked. The “heat” of wasabi is not released until it is macerated, and the flavor depends on how finely it is grated and how long it is exposed to air – wasabi is volatile, and flavor and heat dissipate in about 15 minutes. Consequently, when grating, do so as needed just before consumption, and use an oroshi grater – traditional ones resemble coarse sandpaper, modern versions are ultra-fine graters usually made of stainless steel.

True wasabi can be found at specialty grocers and high-end restaurants, and is usually sold as a root, as a tinned or jarred paste that is ready to use, or as a dried powder.

You can add wasabi to roasted legumes for extra spice, grate over fish and rice dishes, mix with another condiment and use as a spread for sandwiches, add to mashed potatoes, or use it to spice up a Bloody Mary.