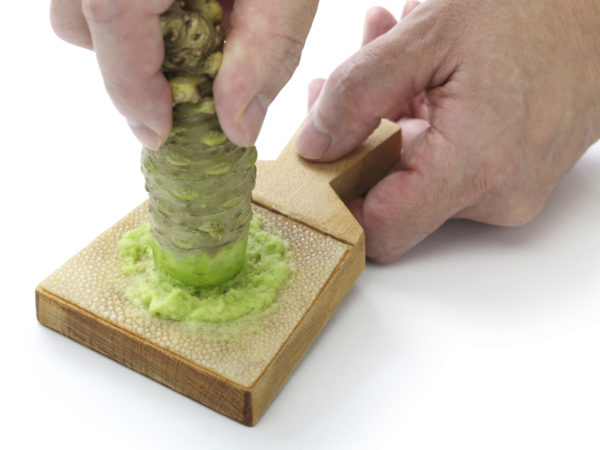 The answer to your question is yes… and no. First of all, you should know that the green paste that usually comes with sushi isn’t really wasabi. It is a combination of horseradish, Chinese mustard and green food coloring. And it may surprise you to learn that this imitation product is now so widely used that – with the exception of some top-flight restaurants that still use genuine wasabi – it even accompanies sushi in Japan. (I’ve been told by wasabi experts that only about five percent of the restaurants in Japan serve the real thing, and I’ve found real wasabi in the United States only in high-end Japanese restaurants in New York and California.) The ubiquitous bright-green paste that you are familiar with will make your eyes water and can clear your sinuses, but it has no significant health benefits, and much of it is artificially colored.

Real wasabi is a different story. It comes from the root-like stem (rhizome) of wasabia japonica, a mustard relative that grows in streams and moist, shady areas of Japan and is now being cultivated in North America, especially in British Columbia. When freshly grated, authentic wasabi forms a light green, coarsely textured paste that is both pungent and flavorful, much more flavorful than the fake stuff. In addition, genuine wasabi has interesting therapeutic effects, including antibiotic properties (which may be one reason Japanese have traditionally used it as a condiment for raw fish).

Wasabi also has anti-inflammatory activity and appears useful for relieving symptoms of seasonal allergies, at least according to enthusiastic reports from those who have tried it. If you don’t get symptom relief from other forms of allergy treatment (I recommend using quercetin and stinging nettle), it would be worthwhile to try capsules of freeze-dried genuine wasabi extract. You can find them at most health food stores. I suggest sticking to those from the Eclectic Institute (www.eclecticherb.com ) produced from wasabi grown in North America.

Wasabi’s medicinal effects are probably related to its content of biochemically active isothiocyanates (ITCs), which also account for its pungency. Research suggests that ITCs have anti-inflammatory, anti-microbial, anti-platelet and anti-cancer effects, but these benefits have been observed in laboratory and a few animal studies. To date there have been no good studies in humans.

Learn more about cooking with wasabi.

Growing wasabi in my garden: The Great Wasabi Experiment.