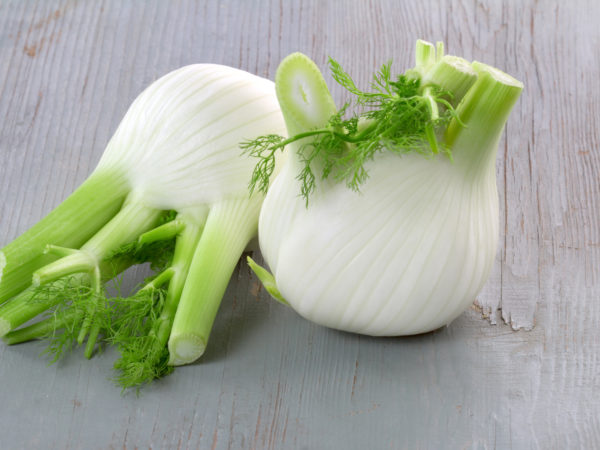 Fennel (Foeniculum vulgare) is a perennial aromatic herb native to areas surrounding the Mediterranean Sea and the Near East. Part of the Umbellifereae family, fennel is related to parsley, carrots and dill. Its taste is similar to that of anise or licorice, and the bulb’s texture is reminiscent of a celery bulb. The bulb, stalks and green leaves are all edible, as are fennel seeds that come from the yellow flowers it produces.

Wild fennel was transplanted, cultivated and cherished by early Greeks and Romans. The mythologies of both cultures regarded it as a gift from the gods due to its medicinal and culinary properties.

Today, fennel is a main component of Italian and French cooking. It is used in the popular eating plan known as the Mediterranean Diet, and is cultivated in the United States, France, India and Russia.

The health benefits of fennel come from its unique combination of phytonutrients including the flavonoids quercetin and rutin, both potent antioxidants. Historically, fennel has been used orally for women’s health concerns: to increase lactation, facilitate birth and promote menstruation (women should first consult their physicians before using fennel for health concerns). It has also been used to address backache, low libido, loss of appetite, and as a natural way to treat infantile colic. It is a well-known remedy for flatulence and other gastrointestinal issues as well. Topically, fennel has also been used to treat snakebites.

Fennel contains a phytonutrient compound called anethole, the primary component of its volatile oil. This compound has been shown in animal studies to have anti-inflammatory and cancer protective effects. Fennel is an excellent source of vitamin C, making regular consumption a good way to support a healthy immune system. It’s also a good source of fiber, folate and potassium.

Culinary uses of fennel are almost unlimited – the crunchy texture and subtle sweetness make it an ideal side dish or added ingredient to everything from fish and salads to desserts. The bulb of the fresh fennel plant can be eaten raw, sauteed, stewed or grilled. The leaves of the plant can be used fresh in many of the same ways dill or parsley are employed. The seeds are often mistaken for anise seeds, as they are similar in taste and appearance, though smaller. They are best used for cooking when they are green in color. The seeds are commonly used in desserts and baked goods.

Fennel is in season from autumn through early spring. When choosing fresh fennel, look for firm bulbs that have not split or bruised, and leaves that are close together. Avoid fennel that has flowering buds – this means it has passed its maturity. It is best eaten right after purchase, as it can quickly lose flavor. However, refrigeration in the vegetable crisper can preserve its taste for up to four days.

Dried fennel seeds should be stored in an airtight container away from light and moisture for up to six months – storing them in the refrigerator will extend their usability.

As for the bulb, I like to refrigerate it until very cold and then slice thinly into salad dishes. This method results in an additional cool, refreshing layer to ordinary salads on hot summer days. The bulb also contributes a deep, complex flavor to soups and stews: just sauté in a little olive oil before adding to the stock of your choice.

Chew one-half teaspoon of fennel seeds after meals to prevent or relieve gas and bloating.