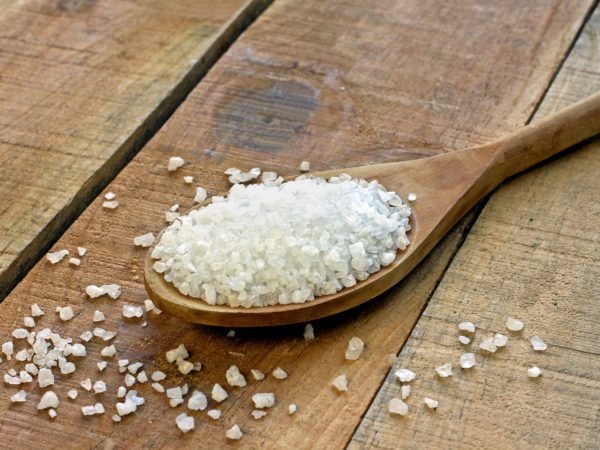 According to the American Academy of Pediatrics (AAP), the diets of many women who are pregnant or breastfeeding are low in iodine, which is essential for normal brain development in infants. It has been a long time since we had to worry about iodine deficiency in the United States. This nonmetallic mineral was added to salt in 1924 to prevent thyroid enlargement (goiter), slowed metabolism, and weight gain, as well as the other symptoms of hypothyroidism (fatigue and intolerance of cold, as well as neurological, gastrointestinal, and skin abnormalities). Iodine deficiency in pregnant or nursing mothers can result in thyroid problems during fetal and child development, and is the most common cause of preventable brain damage worldwide.

You’re quite right that in general most Americans get too much salt, and if that’s iodized salt, they should not experience iodine deficiencies. But as the AAP pointed out in a policy statement issued in May 2014, most of the salt in the U.S. diet now comes from processed foods. That salt is not iodized. The AAP noted that as consumption of processed foods has increased, so have levels of iodine deficiency, with the result that now about one-third of pregnant women in the U.S. are marginally deficient.

Severe, untreated hypothyroidism in infancy has serious, permanent effects on the brain, and milder cases can affect a child’s cognitive development. In addition, a pregnant or nursing mother’s iodine deficiency increases both her and her baby’s vulnerability to the effects of certain environmental pollutants. Most notably, these include thiocyanate (found in cruciferous vegetables and tobacco smoke) and nitrate (found in certain leafy and root vegetables), the AAP said. Another chemical of concern is perchlorate, an environmental pollutant found in about four percent of public drinking water supplies and in a few foods.

The AAP stated that pregnant and lactating women should take supplements that provide adequate levels of iodine and noted that at present only about 15 percent of these women do so. We can get iodine naturally by eating saltwater fish and seafood, kelp and other sea vegetables as well as vegetables grown in soils that contain iodine. Dairy products provide iodine – if the animals graze on plants growing in iodine-rich soils.

The American Thyroid Association and the National Academy of Sciences recommend that nursing mothers have an intake from food and supplements of 290 micrograms (mcg) of iodide per day, which requires a supplement providing at least 150 mcg of iodide. Potassium iodide is the preferred form. Nursing mothers should also use iodized table salt, the academy said. Iodide (specifically potassium iodide) is added to table salt to “iodize” it.

The AAP statement warned that prenatal vitamin supplement labels can be misleading, and urged the FDA to ensure that manufacturers of these vitamins use only potassium iodide and correct inconsistent labeling so that women better understand what they’re buying.

Sources:
American Academy of Pediatrics. “Pregnant and Breastfeeding Women May Be Deficient in Iodine; AAP Recommends Supplements,” http://www.aap.org/en-us/about-the-aap/aap-press-room/Pages/Pregnant-and-Brestfeeding-Women-May-Be-.aspx, accessed May 28, 2014.