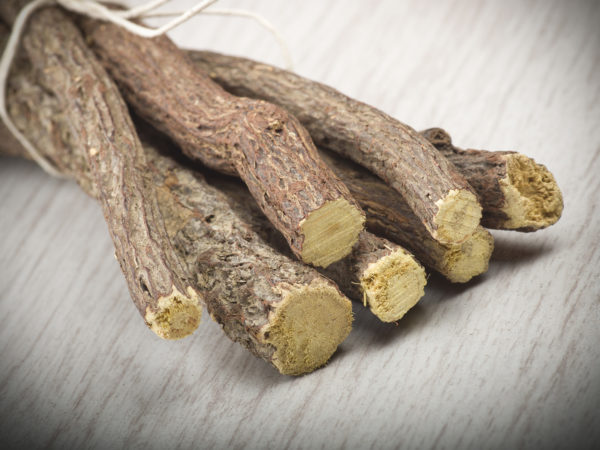 Licorice (Glycyrrhiza Glabra) is a plant native to southern Europe and some regions of Asia, and is part of the Leguminosae plant family. It is not related to anise or fennel, despite its similar flavor. Licorice extract comes from the plants’ roots and underground stems.

The name glycyrrhizin is derived from Greek and means sweet root, highly appropriate since the compound glycyrrhizin, which gives licorice its sweetness, is 50 times sweeter than sugar.  It’s not surprising then that it became popular for use in candies, cookies, and teas. In addition to sweet root, licorice has been called licorice root, liquorice, reglisse, regolizia, suessholz, sweet licorice, and sweet wood.

Licorice has been used for thousands of years medicinally and in cooking. In ancient Egypt, soldiers carried licorice on the battlefields to quench thirst and stores of it were found in King Tut’s tomb, presumably to help him on his journey to the afterlife. Licorice is a widely used herb in Chinese medicine.

While some studies have not shown an effect of Deglycyrrhizinated licorice (DGL) on peptic ulcers, one study of 100 patients taking DGL for stomach ulcers for 6 weeks resulted in 22 people having full resolution, while 90% of participants improved.

In its full, non-DGL form, licorice has been shown in a study to increase the stress hormone cortisol in those taking 500mg per day of glycyrrhetinic acid. This was a small study, but lends some support to licorice’s long history of use as an adaptogen.

The deglycyrrhizinated form of licorice (DGL) is used to relieve discomfort from chronic indigestion, heartburn, stomach ulcers, and canker sores. Whole licorice extract is beneficial for menstrual and menopausal disorders, as well as inflammatory disorders. Topical whole licorice is useful for herpes, eczema, and psoriasis.

Licorice is also used to relieve symptoms of the common cold and is a key ingredient in many over-the-counter cough syrups and lozenges.

Excess intake of licorice may have a negative effect on potassium levels in the body. A high salt diet may exacerbate adverse effects of licorice including water retention and hypertension.

Avoid whole or licorice root if you have high blood pressure, kidney or liver disease, diabetes or heart disease, are pregnant or are breastfeeding.

You should not take licorice root for longer than 6 weeks. There are no known side effects for DGL products.

If using DGL extract, take two tablets chewed slowly before or between meals or one half teaspoon of the powder at the same times.  DGL powder can be made into a paste (swish in mouth for three minutes and spit) to treat mouth ulcers.

Children can be given half the adult dosage for both whole and DGL forms.

The DGL form of licorice has been very effective for many of my patients who suffer from chronic indigestion and reflux. A young patient of mine avoided medication by taking licorice in addition to making some other lifestyle changes. He was 36 years old and was about to embark on a course of prescription medication that he may have had to rely on for many years. It never occurred to him that an herbal remedy could offer such relief.  Of course he had to give up coffee, too.