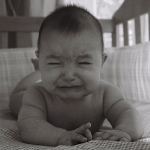 "Ferberizing" an infant refers to the method of dealing with children’s sleep problems developed by Dr. Richard Ferber, director of the Center for Pediatric Sleep Disorders at Children’s Hospital in Boston. He described the method in his book, Solve Your Child’s Sleep Problems, first published in 1985. Dr. Ferber’s method has been described as "let them cry it out," but it is actually more complicated than that. I discussed your question with Sandy Newmark, M.D. a pediatrician at the Osher Center for Integrative Medicine in San Francisco.

Dr. Newmark explained that with the Ferber method a child who is having sleep difficulties is allowed to cry for gradually increasing amounts of time. For example, on the first day that parents follow the method, they would allow the baby to cry for only one minute before going in, then for 3 minutes the next day, then 5 minutes and so on. Dr. Newmark said that the Ferber method is "pretty effective," but that parents have to make up their minds about how to best deal with an individual child’s sleep issues. Dr. Newmark said that he does not recommend the method for infants under nine to 12 months of age, but considers it satisfactory for toddlers over one year old.

If an infant is not sleeping well, Dr. Newmark recommends consulting with a pediatrician to see if any medical issues need to be evaluated, and to discuss the various approaches to improving sleep.

Children who don’t get enough sleep can be cranky and irritable the next day and don’t function as well at school as kids who do get enough. Experts say that without adequate sleep, kids’ relationships with family and friends can suffer. Also, when sleep-deprived, babies and toddlers may not be as alert and open to the world as they should be. You can find tips on how to ensure that your kids get adequate sleep on the National Sleep Foundation website.