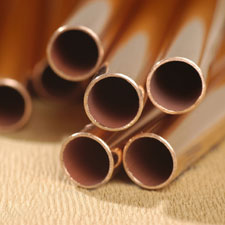 Copper is an essential trace mineral, present in all body tissues. It plays a role in the formation of connective tissue and in the normal functioning of muscles, the nervous system, and the immune system. The daily recommended amount for adults is 900 micrograms (children need less, between 200 and 890 mcg depending on age). Food sources of copper include vegetables, legumes, beans, nuts and seeds, mushrooms, shellfish (especially cooked oysters), avocado and whole grains. We also get copper from drinking water that flows through copper pipes.

A study published in August 2013 in the Proceedings of the National Academy of Sciences found that copper can trigger the onset of Alzheimer’s disease and speed its progression. The researchers, from the University of Rochester Medical Center, reported that copper prevents the clearance and accelerates the accumulation of toxic proteins in the brain and also causes the breakdown of the blood-brain barrier, (the biological shield that protects the brain from toxins and most drugs). The investigators used brain cells from mice and from humans to identify the molecular mechanisms underlying copper’s role in Alzheimer’s. The study also found that copper provoked inflammation of brain tissue, which the researchers said may further promote the "breakdown of the blood brain barrier and the accumulation of Alzheimer’s-related toxins."

However, you should know that scientists elsewhere have come to the opposite conclusion – that copper prevents rather than promotes Alzheimer’s. Commenting on the new study, Christopher Exley, professor in Bioinorganic Chemistry at Keele University in Staffordshire, England, was quoted in news reports suggesting that the amount of copper the Rochester researchers described as being harmful is actually an average, normal amount. In February of 2013, Dr. Exley and his team published a study in which they found what they claimed is "unequivocal evidence that under conditions which are approximately similar to those found in the brain, copper can only protect against beta amyloid forming" and that it is "highly unlikely" that copper is directly involved in forming the plaques characteristic of Alzheimer’s.

Another critic of the new study, George Brewer, emeritus professor of internal medicine at the University of Michigan medical school, faulted the Rochester team for not differentiating copper in drinking water from copper in food. He was quoted as saying that "we have always had copper in food, so it couldn’t possibly be the cause" of Alzheimer’s.

Meanwhile, researchers at the University of California, Los Angeles, published a study suggesting that the accumulation of iron may set off the process that leads to Alzheimer’s. The good news here, according to a statement from study leader, psychiatry professor George Bartzokis in a UCLA press release, is that we can reduce iron intake by cutting back on red meat and iron found in supplements.

Clearly, scientists will have to sort out the ongoing controversy and determine whether copper, or iron, or both play a harmful or helpful role in Alzheimer’s disease. Bear in mind that we ingest only trace amounts of copper, and that we need this mineral for good health. Iron is another story: we know that iron overload can be dangerous and may be much more common than anyone thought. Until we know more, I recommend focusing on what we know you can do to protect yourself from Alzheimer’s disease – adopt an anti-inflammatory diet, get regular physical exercise and be sure to keep your mind active.