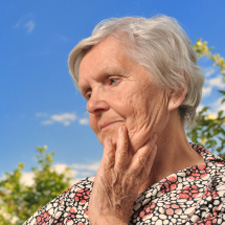 Research presented at an Alzheimer’s Association conference in July, 2013, suggests that people who have a sense that their memory and thinking processes are slipping may have brain changes that can signal approaching dementia years before symptoms become obvious to others or show up on tests. Until recently, doctors who treat Alzheimer’s have viewed patients who reported these subjective changes as the "worried well," according to a report in the July 17, 2013, issue of the New York Times. But now, experts have begun to recognize that the changes that only affected individuals can perceive actually may be the earliest signs of Alzheimer’s. The term "subjective cognitive decline" was coined to describe the experience of people who feel that something is wrong with their memory and thinking skills.

In some cases, tests will show a build-up of beta-amyloid, a protein implicated in Alzheimer’s development, in the brains of people with concerns about their memory and thinking, according to study results presented by neuropsychologist Rebecca Amariglio of Boston’s Brigham and Women’s Hospital and Massachusetts General Hospital. Her team did PET scans on 131 seniors (mean age 73.5) who appeared cognitively normal with no history of serious neurological and psychiatric illness. The investigators found that individuals who reported worse memory relative to their peers were more likely to have increased beta-amyloid levels, as were individuals who reported declines on tasks that required higher-level cognitive processing, such as prioritizing and organizing. The study found that the link between subjective cognitive decline and evidence of Alzheimer’s pathology was stronger in people with higher levels of education and occupational attainment. However, studies elsewhere found that less educated people were more likely to experience subjective cognitive decline.

Dr. Amariglio listed the following changes as signs of "abnormal aging" that may signal the onset of dementia:

More common memory problems regarded as normal include walking into a room and forgetting what you came for; trouble retrieving the names of unfamiliar people, and changes in your memory that are shared by others of your age.

Dr. Ronald C. Petersen, director of the Mayo Clinic’s Alzheimer’s center, told the Times that preliminary results of a Mayo study of healthy older adults in Minnesota found that participants with subjective memory concerns were 56 percent more likely to be given a diagnosis of cognitive impairment, even after results were adjusted for factors like education, genetic risk and psychiatric issues like anxiety and depression.

Not everyone who senses changes in memory and thinking will develop Alzheimer’s, the experts emphasize. Unfortunately, even if more were known about subjective cognitive decline, no treatment is available to stop the changes. On the research horizon: an upcoming three-year trial to test whether an anti-amyloid drug can help prevent dementia in cognitively normal people with increased levels of amyloid in their brains.