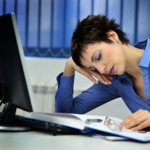 I believe that depression can affect posture. A 2010 study in Brazil examined posture in a group of adults experiencing major depression and compared it with the posture of the same patients during remission. Photographs published with the study show marked differences. One picture shows a depressed patient standing, shoulders slumped, head down and back curved. A later photo of the same patient after remission shows him standing erect, his head held at a normal angle, no longer tilting forward. The researchers suggested that posture (and body image) play a role in the expression and communication of mood disorders.

In her book Yoga for Emotional Balance, clinical psychologist and yoga therapist Bo Forbes explains that depression can imprint itself on both patterns of movement and posture. She writes that when we’re depressed the body “may have what I call ‘Closed Heart Syndrome,’ a postural pattern that illustrates the helplessness, hopelessness, and self-protective withdrawal of depression.” In this syndrome, “the chest sinks and the heart area collapses (making) the breath shallow and slow.” In addition, she says that “the upper spine and shoulders round, as though to protect the heart from further disappointment. This also protects us from intimacy, which people with depression may see as merely another chance to be hurt.”

In yoga, Dr. Forbes explains, “we use head and neck alignment, heart-opening restorative postures and deep breathing to lift and balance depression.” She adds that “people who have physical symptoms of depression often benefit from lengthening and opening the upper thoracic spine and chest areas.”

Some research suggests that yoga, along with strength and flexibility training, can effectively address depression, and we know that other forms of exercise, principally aerobic exercise such as walking or jogging, can improve mood. Many studies show that depressed patients who stick to a regimen of aerobic exercise improve as much as those treated with medication and are less likely to relapse. The data also suggest that exercise prevents depression and boosts mood in healthy people. More research is needed to reveal exactly how exercise does this and to determine just how much and what kind works best, but given what we now know, I consider it inexcusable to omit exercise from an integrative treatment plan for emotional well-being.

For a full discussion of natural remedies for depression and an integrative plan for optimum emotional well-being, watch for my new book, Spontaneous Happiness, to be published by Little, Brown & Co. in November of this year.