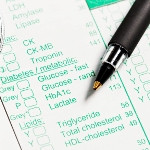 Triglycerides are the chemical form in which fat moves through the bloodstream. They are derived directly from fats in your diet and are also made in the body from other energy sources such as carbohydrates. When the calories you consume are not used immediately, they are converted to triglycerides and stored in fat cells. Hormones then regulate their release to meet energy needs. Whenever your LDL ("bad") cholesterol is measured, triglycerides are also checked. Levels lower than 150 milligrams per deciliter (mg/dL) are considered normal, and levels above 200 mg/dL are considered too high.

I discussed your question about the drop in your triglycerides from one day to the next with Stephen R. Devries, M.D., a preventive cardiologist at Northwestern Memorial Hospital in Chicago. He noted that triglycerides in the blood change dramatically after eating. For that reason, they always should be measured after a 10-hour fast. Dr. Devries said that if you ate before your first triglyceride reading, it would be expected to be higher than a measurement taken after fasting. But he added that even fasting measurements of triglycerides can vary substantially based on day-to-day dietary changes (unlike LDL and HDL which change more slowly).

Intake of carbohydrates, especially the high-glycemic-load kinds that quickly raise blood sugar can make triglycerides soar. Reducing intake of these carbs, along with regular exercise, and weight management will help keep triglycerides under control. I would also suggest cutting back on alcohol, avoiding beer especially (even small amounts of which can elevate triglyceride levels). Also, increase your intake of omega-3 fatty acids by eating salmon, sardines, black cod, and herring on a regular basis. You should also consider taking a good fish oil supplement, at least two grams per day, which can help lower your triglycerides into the healthy range. Fasting triglycerides should be less 150 and, optimally, less than 100.