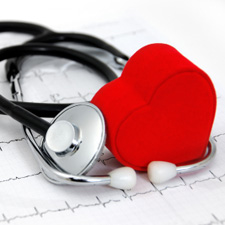 Whether you feel them or not, all heart attacks have the same cause: a blockage or severe reduction in the flow of blood to the heart muscle.

A new investigation has found that silent heart attacks – those that don’t have the usual symptoms of chest pain, shortness of breath or cold sweats – may account for 45 percent of all heart attacks. The researchers, from Wake Forest Baptist Medical Center in North Carolina, reported in the American Heart Association journal Circulation that having one of these heart attacks triples the risk of dying from heart disease and increases the risk of dying from all causes by 34 percent. The study showed that silent heart attacks are more common in men but more likely to prove fatal to women.

To reach these conclusions the researchers analyzed the records of 9,498 adults ages 45 to 64 enrolled in an atherosclerosis risk study already in progress in 4 communities in Maryland, Minnesota, Mississippi and North Carolina. When they joined the study, none of the participants had heart disease.

The aim of atherosclerosis risk study was to examine the causes and outcomes of atherosclerosis (hardening of the arteries). In the course of their investigation, the Wake Forest researchers found that over an average of nine years, 317 of the participants had silent heart attacks while 386 others had heart attacks with the usual symptoms. The research team followed the participants for more than 20 years to determine causes of deaths. They also looked at differences in heart attacks between blacks and whites and men and women.

The research team found that silent heart attacks may have very mild, barely noticeable symptoms that can include unexplained fatigue, pain or discomfort in the throat, neck or jaw, or what seems like heartburn. The danger of not recognizing a heart attack is that patients don’t get needed treatment to halt progression of damage to the heart or to lower risk of a subsequent attack. You may not know that you’ve had a silent heart attack until weeks, months or even years later when the effects are detected via electrocardiograms.