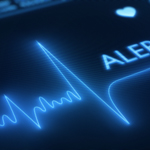 An electrocardiogram (EKG or ECG) is a test that records the electrical activity of the heart. It shows how fast the heart is beating, the integrity of its electrical impulses, and whether its rhythm is normal. Medical experts have been rethinking the need to perform EKGs as part of routine screening of healthy patients. The procedure may not be useful in those who have no risk factors for heart disease, such as high blood pressure or high cholesterol levels and no symptoms of heart disease such as shortness of breath or chest pain. In April, 2012, nine medical specialty groups listed EKGs (which can be done when patients are at rest or as part of a treadmill stress test) among 45 tests and procedures that doctors should do less often. Then, in July, 2012 the U.S. Preventive Services Task Force (USPSTF) posted a similar recommendation about EKG testing, updating the guidance they issued on this topic in 2004.  (The USPSTF is a group of independent experts that makes evidence-based recommendations about clinical preventive services such as tests that screen for disease.)

The task force concluded that there’s no good evidence to show that EKG results tell doctors any more about a patient’s risk of heart disease than examining recognized risk factors, such as blood pressure, cholesterol levels, family history, or whether or not the patient smokes. The task force also concluded that there’s not even enough evidence to decide whether it is worthwhile to order EKGs for patients considered at intermediate or high risk of heart disease.

While EKGs are safe and relatively inexpensive (about $50), the task force noted that abnormal results can lead to more testing that can be invasive, risky and expensive. If the abnormal EKG was a false positive – that is, it suggested heart disease when none existed – the additional testing is, at best, anxiety-provoking to patients as well as a waste of time and resources. At worst, it can do actual harm.

Don’t expect to see EKGs disappear any time soon, despite the new recommendations and the lack of evidence to show that they’re worthwhile as screening tests. If your doctor recommends one, be sure to ask what the benefits would be for you, particularly if you have no risk factors for heart disease and no symptoms that could indicate a problem.

Here’s where you’ll find information about the risk for heart disease and my recommendations for what you can do about it.