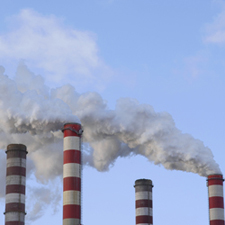 Climate change is having a negative affect on human health. I’ve written before on this site about some of the effects already observed: increasing and more severe cases of respiratory diseases, as well as greater risks of stroke and heart attack.

Recent research has confirmed that increasing levels of air pollution associated with climate change are linked to a higher incidence of stroke. The latest study looked at data from both the United States and China to assess the interaction between air quality and the prevalence of strokes, as well as the potential effect global temperature could have. Lead researcher Longjian Liu, M.D., Ph.D. of Drexel University in Philadelphia said the study focused on these two countries because they are the world’s "largest emitters of greenhouse gases and responsible for about one-third of global warming to date." His team evaluated air quality data collected between 2010 and 2013 from 1,118 counties in the U.S. and from 120 cities in 32 provinces in China. They noted that particles of dust, dirt, smoke and liquid droplets less than 2.5 micrometers in diameter (1/30th the diameter of a human hair and invisible to our eyes) pose the greatest risk to health. The researchers found that the total number of strokes rose 1.19 percent for each 10 micrograms per cubic meter of air containing these microscopic particles. They also reported significant regional variations in levels of these particles linked to strokes.

In the U.S. the highest levels of these particles were seen in the south and the lowest in the west. These findings square with a higher prevalence of stroke in the south compared to the west. Higher temperatures also affect air quality and the risk of stroke, as they create "a critical thermal stress that may lead to an increased risk for stroke and other heat-and air-quality-related illnesses and deaths," Dr. Liu said in presenting his findings at the American Stroke Association’s International Stroke Conference 2016 in February.

The effect of air pollution on brain size may help explain the association between poorer cognitive function and first strokes seen in seniors who live close to major roads. A study published in 2015 in the journal Stroke determined that the same tiny particles of dust, dirt and smoke linked to stroke can lead to cognitive impairment and hidden brain damage. "Long-term exposure to air pollution showed harmful effects on the brain in this study, even at low levels, particularly with older people and even those who are relatively healthy," according to study leader Elissa H. Wilker, Sc.D. of the Harvard T.H. Chan School of Public Health. She and her team analyzed 943 participants in the Framingham Offspring Study who were relatively healthy with no dementia or history of stroke. They lived in an area where air pollution levels are low compared to other parts of the U.S.

Between 1995 and 2005, Dr. Wilkir’s team used MRI scans to assess the effect of long-term exposure to air pollution on markers of brain structure. They found a link between a 2-microgram-per-cubic-meter-of-air increase in tiny particulate matter and a 0.32 percent smaller total brain volume, and identified a 46 percent higher risk of silent stroke. (Silent strokes cause no easily recognized symptoms but lead to permanent brain damage.)