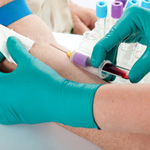 Research from the Harvard School of Public Health indicates that people with type O blood are at slightly less risk of heart disease than those with the other types: A, B, or AB. Type O is the most common blood type, but I wouldn’t depend on it alone to protect against heart disease. The Harvard investigation looked at the 89,500 men and women who participated in two long-term observational health studies. Over 20 years, 4,070 people in both studies developed heart disease. Those with type A blood had a 5 percent increased risk over people with type O; those with type B, had an 11 percent increased risk compared to study participants with type O, and those with type AB (the rarest type of all, found in only 7 percent of the U.S. population) were at 23 percent increased risk. In calculating the risk presented by blood type, the researchers considered contributing factors, such as age, race, gender, menopausal status, diet, smoking status, history of drinking alcohol, medical and family history of heart disease, all established risks for heart disease. The researchers said that the percentages and distribution of different blood types seen among the men and women enrolled in the two studies reflected levels seen in the general population.

The study didn’t look at how blood type increases the risk, but the researchers noted that other studies have suggested that blood type might influence cholesterol levels or the risk of developing blood clots, both of which contribute to heart disease. For example, blood type A is associated with higher levels of LDL ("bad") cholesterol. Type AB has been linked to inflammation, which may adversely affect blood vessel functioning. In addition, research suggests that type O blood may contain a substance with a protective effect on blood flow and clotting.

While these findings are interesting, of greater concern than your blood type are your other risks of heart disease – whether or not you smoke, your weight, blood pressure, and how much exercise you get. Smoking alone trumps the increased risks presented by blood types seen in this study.