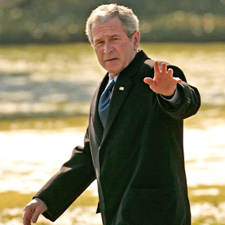 According to news reports, former President George W. Bush had a stent placed in one of his coronary arteries to help keep it open after removal of a blockage that was discovered during his annual physical exam. According to the American Heart Association (AHA) about 492,000 of these surgeries, called Percutaneous Coronary Interventions (PCI), were performed in the United States in 2010, 67 percent of them on men. These surgeries are minimally invasive. Bush was released from the hospital just one day after the stent insertion and planned to resume a "normal schedule" the day after his release, according to the New York Times.

Stents are small mesh tubes made of metal or fabric that are placed in narrowed or weakened arteries during angioplasty, a procedure used to restore blood flow to the heart. Some stents (called drug-eluting stents) are coated with medication that is slowly released. The overall goal is to help lessen the risk of chest pain caused by reduced blood flow to the heart through a partially blocked coronary artery. Heart attacks occur when blood flow to a portion of the heart is completely cut off.

Your question as to whether or not stents do any good is a challenging one. A recent analysis published in 2012 included data on 7,229 patients who were followed for four years. The researchers found that stenting was no better than standard medical care for patients with stable coronary artery disease, defined as chest pain (angina) that occurs after exercise or emotional stress but generally not at other times. (This overview didn’t look at studies of the emergency use of stents for heart attacks.) The investigators reviewed eight randomized trials that compared PCI with standard medical care, which includes the use of beta-blockers, ACE inhibitors (medications used to treat high blood pressure), statins for cholesterol reduction, and daily aspirin to help prevent blood clots.

When they combined the data from the studies, the investigators concluded that standard treatment was as effective as stents for preventing angina, heart attack, the need for future PCI, and death. They found PCI death rates of 8.9 percent and medical treatment death rates of 9.1 percent. Of patients who received stents, 8.9 percent eventually suffered nonfatal heart attacks compared to 8.1 percent of patients treated with medicine alone.

Study co-author David Brown, M.D., of Stony Brook University Medical Center in New York, told the New York Times after the analysis was published that (at the time) more than half of patients with stable coronary artery disease get stents even before a trial of drug treatment. He said he believes the reason for this is financial, because "in many hospitals, the cardiac service line generates 40 percent of the total hospital revenue, so there’s incredible pressure to do more procedures."

Dr. Harlan Krumholz, a cardiologist and professor of medicine at Yale who was not involved in the review, was also quoted in the Times as noting that it is important to disclose to patients that PCI "is not known to be lifesaving or to prevent heart attacks" and that the expectation that the procedure will help patients live longer "is out of alignment with the evidence."

That report is unlikely to be the last word on this topic, but it is the latest word we have.