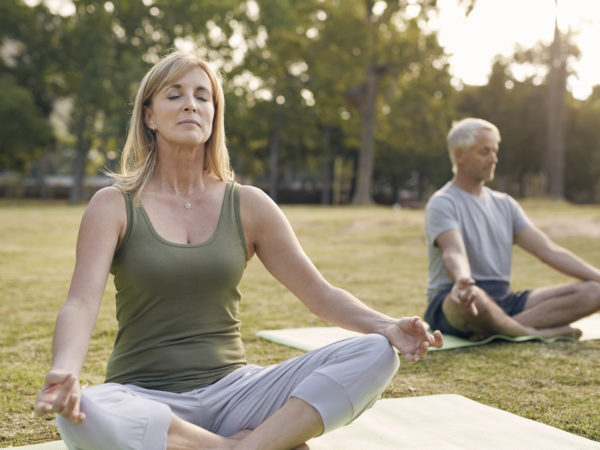 Yoga may indeed help lower blood pressure, but we don’t have a lot of research that has looked into this possibility. The latest scientific word came from a study at the University of Pennsylvania published in 2016 Researchers recruited 137 men and women ages 18 to 80 who had prehypertension or untreated stage one hypertension. None of the participants had taken any medications for it in the three months before they joined the study.

The volunteers were randomized to these three groups:

After 12 weeks, blood pressure had dropped among all three groups, but the reduction was larger in the groups that performed yoga alone or yoga plus the exercise and dietary changes. However, the blood pressure changes in the yoga only group participants did not persist when they were assessed at follow up 24 weeks later.

We don’t know what it is about yoga that was responsible for the blood pressure reductions seen. Regular exercise is known to help lower blood pressure, so part of the effect may have been the physical activity involved. However, as practiced in this study, the yoga wasn’t as strenuous as walking on a treadmill at about two miles per hour. Another possibility is that the yoga worked by counteracting stress.

A study from India compared the effects on blood pressure of brisk walking for 50 to 60 minutes 4 days a week, reducing salt intake by half, or practicing yoga for 30 to 45 minutes at least five days per week. A total of 113 people took part in this 8-week study. Blood pressure dropped in all three groups compared to a control group that didn’t exercise, lower salt intake, or practice yoga.

Encouraging as the results of these two studies are, we need larger and longer-lasting ones before we can say for sure that practicing yoga can lower blood pressure and keep it at desirable levels.

In addition to what we’re learning about yoga’s effect on blood pressure, research suggests that it can benefit health in other ways. It can reduce chronic low-back pain, improve quality of life, reduce stress and relieve anxiety, depression and insomnia, as well as improve physical fitness, strength and flexibility. According to the National Center for Complementary and Integrative Health, ongoing studies are investigating yoga’s effects on diabetes risk, HIV infection, immune function, several forms of arthritis, menopausal symptoms, multiple sclerosis, post-traumatic stress disorder and smoking cessation.