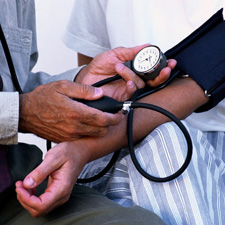 Blood pressure readings aren’t static – they can differ from one measurement to another and even from one arm to the other. Slight differences aren’t anything to worry about, but a new study suggests that wide variations could be meaningful.

The study, from the University of Alabama, Birmingham, was aimed at determining if greater variations in blood pressure readings over time were linked to an increased risk of heart disease or death. The researchers enrolled 25,814 men and women age 55 or older who had high blood pressure. All of these patients were already enrolled in a blood pressure medication study. To begin, the participants’ blood pressure was measured at seven visits spread over 22 months to determine how much variability there was between measurements of both systolic (the top number) and diastolic (the bottom number) from visit to visit. Then they followed the participants for an average of 2.8 years to see who developed cardiovascular disease – including heart attack and stroke – or died. The aim was to identify whether these patients had greater variability in their blood pressure readings than others in the study.

Results did show that the greater the blood pressure variability over the course of the seven visits, the higher the odds that a participant had a fatal or nonfatal heart attack, a stroke, or died as a result of cardiovascular disease or something else. More precisely, the study showed that these outcomes were more likely to occur among the one-fifth of participants whose systolic blood pressure was most variable compared to those in the one fifth whose variations were smallest. In the highest one-fifth, patients were 30 percent more likely to have a non-fatal heart attack or die of cardiovascular disease than those in the lowest one fifth. Chances of a stroke were 46 percent higher in the top one-fifth, while the risk of heart failure was 25 percent higher and the risk of death from any cause was 58 percent higher than in the lowest fifth.

Despite these findings, we can’t be sure that the variations in blood pressure seen in these patients were responsible for the health problems they encountered or vice-versa. The study didn’t prove cause and effect.

The investigators concluded that more research is needed to determine if lowering blood pressure variability can reduce the apparent risks seen.

In 2012, I reported on results of a British study showing that when systolic readings differed by 15 points or more between arms, risks were higher for certain heart-related disorders. Here, a 15-point difference from one arm to another was associated with 2.5 times the normal risk of peripheral artery disease (narrowing of blood vessels outside the heart and brain). Significant differences from one arm to the other also meant a 60 percent higher risk of stroke disease and a 70 percent increase in the risk of death from heart disease.

If you have high blood pressure, I suggest investing in a home monitor to perform regular checks. Frequent monitoring – by patients, at home – can give doctors a more realistic idea of the range of your blood pressure. If you’re concerned about large variations or notice that any develop over time, keep a record of your readings to discuss with your doctor at your next visit.