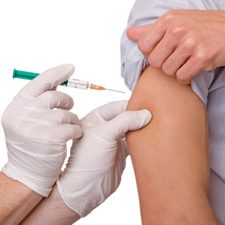 In some cases, adults do need re-vaccinations, but not necessarily for polio and measles. I discussed your question with Randy Horwitz, M.D., Ph.D., medical director of the Arizona Center for Integrative Medicine. He noted that individuals born before 1957 are presumed to be immune from measles, since before that year, almost everyone contracted measles during childhood and would therefore be protected against further attacks. If you were born after 1957, you don’t need to update the measles vaccination as long as you have documentation showing that you were vaccinated as a child, or have laboratory results showing that you’ve had measles and are immune.

Dr. Horwitz also said that before 1963, there were two types of measles vaccines. One, still in use, is a live, attenuated vaccine. A killed vaccine, available in the United States from 1963 through 1967, was found to be ineffective. Anyone who received the killed measles vaccine should be revaccinated with live vaccine. If you were born between 1957 and 1968 and don’t know which type of vaccine you received, you should get at least one dose of the MMR (measles, mumps rubella) vaccine currently in use, Dr. Horwitz advised, noting that this is in alignment with the recommendation of the U.S. Centers for Disease Control and Prevention (CDC). In addition, the CDC recommends that adults at increased risk for infection, such as health care professionals, should receive two doses of the MMR vaccine separated by at least four weeks.

As for polio, Dr. Horwitz cites the CDC recommendations for re-vaccination (or booster shots) for certain adults. These individuals include those who may be at higher risk because they’re traveling to areas of the world where polio is common, laboratory workers who might handle the poliovirus, and health care workers treating patients who could have polio. In these cases, the CDC recommends that those who have had three or more doses of polio vaccine in the past may need only a booster shot of Inactivated Polio Vaccine (IPV), but adults who have not been vaccinated should get three doses of IPV, two doses separated by one to two months, and a third dose six to 12 months after the second.

Other vaccinations recommended for adults by the CDC include an annual flu shot; a booster shot for tetanus and diphtheria every 10 years; and the varicella vaccine for chicken pox if you’re over the age of 13 and haven’t had chickenpox.

Adults may need a number of other vaccines depending on their circumstances, travel plans, and health history. These vaccines can offer protection against hepatitis A and B, the human papilloma virus (HPV), meningitis, pneumonia, and shingles