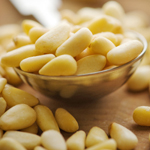 Strange as it may seem, the bitter or metallic taste you describe can come from eating pine nuts. In fact, there’s now a name for it: "pine mouth syndrome." The medical term is cacogeusia. Based on what I’ve read, the change in taste develops 24 to 72 hours after you eat pine nuts and can last a few days or even as long as two weeks, but it does eventually go away.

Pine mouth syndrome was first reported in Europe in 2001, but didn’t get much attention until 2010 when Marc-David Munk, M.D., an emergency medicine physician at the University of New Mexico reported his own experience in a medical journal. He developed the bitter taste about 24 hours after eating some pine nuts at a salad bar. In Munk’s case, the taste was worst on the second day, then slowly disappeared and was gone five days later. He had no other symptoms.

The FDA has received a number of reports of this phenomenon, but since no one has gotten sick and the only symptom – the bad taste – is temporary, many more people may have been affected and not bothered to report their experience.

No one knows for sure why this happens, or why it occurs on an irregular basis, but there are two theories. One is the fact that pine nut oil goes rancid very quickly and may somehow be the culprit. The other comes from chemical analysis run in Switzerland on imported pine nuts. The researchers found two varieties in commercial products that haven’t traditionally been eaten: Chinese White Pine and Chinese Red Pine. (There are more than 100 types of pine nuts, but only 29 are classified as edible by the Food and Agriculture Organization of the United Nations.) I’ve read that the two varieties identified by the Swiss researchers have different fatty acid profiles from edible pine nuts, which may be a factor in pine mouth syndrome. All pine nuts look alike, so you can’t tell one from the other.

Fortunately, whatever it is about some pine nuts that led to the unpleasant reaction you experienced, the bitter taste shouldn’t last too long.