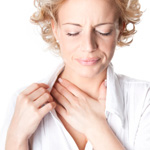 This condition is a type of esophageal spasm characterized by powerful contractions that occur when swallowing. It is usually caused by gastroesophageal reflux, the backflow of stomach acid up the esophagus, which causes heartburn. Acid reflux that occurs more than twice a week is called gastroesophageal reflux disease (GERD), a more serious condition that, left untreated, can lead to problems such as chronic inflammation of the esophagus (esophagitis) and a precancerous condition called Barrett’s esophagus.

The symptoms of nutcracker esophagus can be alarming – chest pain so severe that it can be mistaken for a heart attack and the feeling that food is stuck under the breastbone.

Since GERD is likely to be the cause, I recommend that you take steps to deal with that. This requires addressing lifestyle factors such as smoking and excess weight as well as eating small, frequent meals instead of three large ones, avoiding lying down within three hours of eating, not eating foods that seem to trigger your symptoms and avoiding tight clothing, especially around your midsection. In addition to these measures, conventional medicine typically treats GERD with medication. Many patients are instructed to start taking over-the-counter antacids, which I advise avoiding since they only mask the symptoms. If antacids don’t help, drugs to block stomach acid production may be prescribed. It is not a good idea to use these drugs long term, both because they have significant side effects and because they can worsen the condition over time.

My recommendations for dealing with GERD include the following measures:

You can find additional suggestions for managing symptoms of GERD here, including a trial of hypnotherapy.

I also advise practicing a relaxation strategy, since stress and anxiety can worsen GERD. Try my 4-7-8 breath, a natural tranquilizer that is subtle to begin with but gains in power with repetition and practice. Do it at least twice a day. You cannot do it too frequently. However, do not do more than four breath-cycles at one time for the first month of practice.