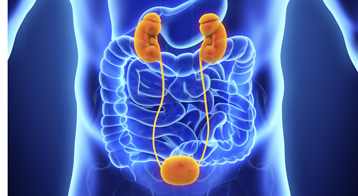 What is incontinence?
Urinary incontinence is a condition characterized by unintentionally releasing urine. It affects about 12 million Americans and is more common in women than men. It can be a problem at any age, but is especially prevalent in older individuals, with at least 1 in 10 people age 65 or older complaining of this problem. Although associated with aging, age itself does not cause incontinence. It can occur for several different reasons and can last for a short time or indefinitely. Unfortunately, out of embarrassment, many people with bladder control issues don’t seek medical advice, despite there being a number of effective treatments available.

What are the symptoms?
There are several types of urinary incontinence, each with subtle differences in symptoms and causes.

Urge incontinence results when people can’t hold their urine long enough to get to the toilet in time and feel the need to go right now.

Overflow incontinence occurs when small amounts of urine leak from a bladder that is always full.

Functional incontinence is a condition experienced by many people with normal bladder control who, because of issues with personal mobility, find it difficult to get to the toilet on time.

What are the causes?
Stress incontinence is the most frequent type of bladder control problem seen in younger and middle-age women. It is particularly common after menopause, but it can also occur when pelvic muscles have been weakened by multiple childbirths or abdominal surgery.

Urge incontinence is due to involuntary contraction of the bladder muscles more frequently than normal and at inappropriate times, such as when the bladder is only partially full. The cause is unknown in most cases but the disorder has been linked to side effects of drugs, nerve damage, stroke, and neurological diseases such as multiple sclerosis and Parkinson’s disease. Other possible causes are urinary tract infections, bladder cancer and, in men, benign prostatic hyperplasia (BPH). Some evidence also suggests that this kind of an overactive bladder is more common in people with depression, anxiety, attention deficit disorder, fibromyalgia, and irritable bowel syndrome (IBS).

Overflow incontinence occurs most often in men when the urethra becomes partially blocked. This can come from tumors but more often is due to an enlarged prostate.

Functional incontinence typically arises as a complication from unrelated physical problems such as arthritis and other pain syndromes, ambulatory challenges following an injury or stroke, or cognitive issues such as dementia that prevent one from getting to the bathroom in a timely fashion.

What is the conventional treatment?
Doctors will often prescribe medications to treat incontinence.  The main group of drugs used for stress and urge incontinence include anticholinergics such as Detrol LA (tolterodine) and Ditropan (oxybutynin), also available as a patch called Oxytrol. They work by modifying nerve signals to the bladder and reducing unwanted contractions in the bladder muscle. They may also help increase bladder capacity and decrease the urge to go. These all are similarly effective, but they frequently cause side-effects that include dry mouth, constipation, blurred vision, and increased heartbeat, along with eye problems and, in some cases, an inability to urinate. Certain people should not take these kinds of medicines, including those with glaucoma, urinary retention, or gastrointestinal disease. Estrogen applied vaginally may be helpful in women after menopause, although there isn’t strong evidence to recommend its use. Treatment of BPH can improve overflow incontinence in men.

Occasionally doctors will recommend patches or tampon-like plugs for the urethra to treat stress incontinence.  A vaginal insert called a pessary can also be helpful, especially for those with prolapse of the bladder or uterus that may accompany weakened pelvic muscles.

Electrical stimulation is an experimental procedure where electrodes are temporarily placed in the vagina to stimulate and stabilize the urethral muscles that control urine flow. In addition, a number of minor surgical procedures can help. A study published in the December, 2004, issue of Obstetrics and Gynecology described a new method that involves implanting a polypropylene tape around the mid-urethra through a small vaginal incision. This can be done on an outpatient basis. Researchers in Finland reported that of 64 women treated, the overall cure rate was 81 percent and the tape remained effective seven years after being implanted.

Another new procedure reported at a November, 2004, meeting of the Radiological Society of North America involved transplanting women’s stem cells into the urinary tract to restore muscle mass and contractility. Researchers from Austria reported on a small study involving only 20 women. The outpatient procedure takes 15 to 20 minutes, and women notice results within 24 hours. The stem cells are collected from blood, cultured in the lab for six weeks, and then injected.

Surgery can improve or cure incontinence if it is caused by a problem such as a change in the position of the bladder or blockage due to an enlarged prostate. Common surgery for stress incontinence involves pulling the bladder up from the pelvic floor and securing it. When stress incontinence is serious, the surgeon may use a wide sling.  This holds up the bladder and narrows the urethra to prevent leakage. For urge incontinence, a surgical procedure called bladder augmentation uses part of the bowel to increase bladder capacity. Another procedure implants a small device, similar to a pacemaker, under the skin, which is connected to a wire and sends small electrical pulses to nerves that control the bladder and muscles surrounding it. These procedures are often reserved for severe cases.

What therapies does Dr. Weil recommend for incontinence?

2. Exercise:
Practice Kegel exercises to strengthen pelvic-floor muscles and improve bladder control. This involves squeezing the pelvic muscles, holding the tension for a count of 10, and relaxing for a count of 10. Repeat 20 times, three to four times a day. A study published in the November 2004 issue of the American Journal of Obstetrics and Gynecology showed that Kegel exercises work best for women who don’t need to wear a protective garment, don’t leak at first cough, and aren’t incontinent daily. They were least effective for women who reported two or more leakages daily, had used psychiatric drugs long-term, and leaked at first cough.

3. Mind/Body:
Consider biofeedback, which can help you identify and strengthen your pelvic floor muscles and can help with Kegel exercises. This training teaches you to use signals from your body to help control symptoms. To find a therapist qualified to treat stress incontinence with biofeedback, contact the Biofeedback Certification Institute of America (BCIA) or visit: www.bcia.org.