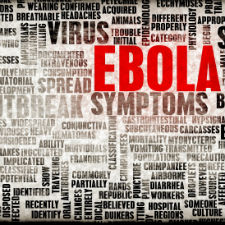 Your instinct is 100 percent correct. Any product advertised or sold as a means of curing disease caused by the Ebola virus is a total scam. There is no "natural" cure for Ebola, and the only way to prevent it – in the extremely unlikely event you come in contact with someone infected with the virus – is to follow established medical protocols, which are themselves evolving. (Bear in mind that you cannot get this disease from people who have no symptoms.)

I’ve seen some of the more egregious on-line promotions for nutritional supplements said to destroy the Ebola virus naturally. One ad claims that "not a single virus has been tested that is not inactivated (killed) by a large enough dose of vitamin C," while another touts a product that offers "a power unequalled in the world of medicine that we can (use) to save many lives of people infected with Ebola." This product combines vitamin C with baking soda, iodine, selenium and magnesium salts and promises that if the Ebola epidemic gets out of hand, "it is comforting for parents to know that they can legally administer these same medicinals if infected people are treated at home." Still another product is described as "a well-known, well characterized, nutrient. That is Nano Silver…[which] does kill every pathogen against which it has been tested, worldwide, without exception."

You should be aware that a group of trade associations for supplement manufacturers has advised retailers not to stock or sell any supplements presented as treatments, cures or preventives for Ebola. Beyond that, the FDA has issued warning letters to three manufacturers marketing such products. In its letters, the FDA noted that none of the products being promoted are FDA-approved drugs, but their marketing "makes the sort of claims that only approved drugs may make – that they can be used to treat, mitigate, prevent and cure diseases."

If you’ve been keeping up with the news on the Ebola epidemic in West Africa and the few cases in the U.S., you know that we have no sure-cure for the disease and no way to prevent its spread other than strict infection control measures in hospitals – which must be carefully followed – to protect the medical personnel who care for patients.

Ebola is a major problem in West Africa, and is likely to remain in the headlines for some time. But despite all the media attention on potential risk to Americans, chances of developing the disease in North America remain about as close to zero as you can get.