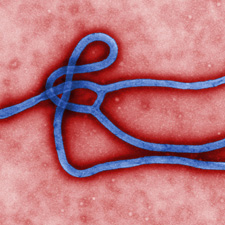 It is highly unlikely that the Ebola outbreak in West Africa will spread to large numbers of people worldwide, although health authorities have said that it may reach the African countries that share borders with Guinea, Sierra Leone and Liberia, where the current cases have occurred. So far, more than 1,600 people have been infected with the virus that causes Ebola hemorrhagic fever, the worst epidemic of the disease since it was identified in 1976. As of this writing, more than half of those infected have died.

We don’t know where this latest outbreak originated, although evidence suggests that fruit bats may be the natural reservoir for Ebola and the related filovirus that causes Marburg hemorrhagic fever, another serious disease. The virus is transmitted person-to-person via contact with body fluids such as blood or other secretions or by contact with needles or other objects that have been used by an infected person. You can’t pick up the virus from the air, water or food. In addition to humans, primates including gorillas, monkeys and chimpanzees are susceptible. Someone who has been exposed to the virus cannot pass it to others unless symptoms develop.

Symptoms begin two to 21 days after exposure, and commonly include fever, headache, joint and muscle aches, weakness, diarrhea, vomiting, stomach pain and lack of appetite. The disease can spread rapidly in health care centers where proper precautions are not taken and among family and friends of an infected person who have not adequately protected themselves. In hospitals and health care centers, Ebola patients are supposed to be isolated and health care workers are required to wear full protective clothing including a hospital gown, masks, gloves, and goggles. Unfortunately, these rules are not always strictly followed in some settings and are often ignored by families caring for Ebola victims.

No reliable treatment is available for Ebola. You may have read or heard about two U.S. citizens, a physician and an aid worker, who contracted the disease and have returned to this country. Both were put into isolation at Emory University Hospital in Atlanta, which has a special containment unit for patients with dangerous infectious diseases. Both were treated with Zmapp, an experimental drug meant to neutralize the Ebola virus so it cannot do further damage. The drug had not previously been used in humans. As of this writing, both patients are said to be doing well. It is unlikely that this drug will be available to treat victims of the disease in Africa, since it is not being mass-produced and has not been tested in humans.

The Ebola outbreak has generated a fair number of scare stories, including the irresponsible suggestion by some lawmakers that migrant children seeking to enter the United States at the Texas-Mexican border might have the disease. If you’re worried about encountering the virus that causes this terrible disease, your best prevention strategy is to stay out of the African countries where it is present.

Visit the Centers for Disease Control and Prevention’s website for the latest information on Ebola.