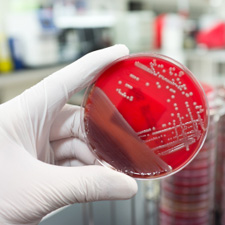 I don’t blame you for being skeptical about whether the bacteria reported in the news lately are as bad as they’re made out to be. In this case, however, it was the director of the U.S. Centers for Disease Control and Prevention (CDC) who used the term "nightmare bacteria" to emphasize the very real threat posed by germs that resist even our strongest antibiotics. Some of the infections with these very bad bugs have been killing up to half of all patients infected.

The bacteria in question are carbapenem-resistant Enterobacteriaceae, better known by the acronym CRE. They belong to the Enterobacteriaceae family, with its more than 70 types of bacteria, including Klebsiella, Salmonella, Shigella and E. coli. By acquiring bits of specialized DNA in their genomes, some of them have become impervious to antibiotics, including carbapenems, which are very strong drugs used as a last resort to fight severe infections. When CRE invade the bloodstream, bladder or other areas of the body where they don’t belong, the infections they cause can be difficult, if not impossible to treat. During a telephone news conference, CDC director Thomas R. Frieden, M.D., said that the death rate for CRE infections of the bloodstream can be as high as 50 percent.

One of the reasons CRE are so scary is that they are able to pass their genetic trait for antibiotic resistance to other bacteria. And they are becoming more prevalent. The CDC reports that one type has been detected in medical facilities in 42 states and that over the past 10 years, there has been an almost seven-fold increase in the spread of the most common type of CRE.

The patients most likely to become infected with CRE are those who are being treated with medication delivered via ports or catheters in hospitals or nursing homes and those being treated with strong antibiotics. Another threat: some of the drugs these patients are treated with cause diarrhea, which can propel CRE out of the body and into the air. These bugs are also adept at surviving on plastic, glass and metal surfaces.

The CDC has come up with practical suggestions for containing CRE, including a renewed emphasis on hygiene, including handwashing by medical personnel and keeping CRE patients in separate sections of hospitals. But that may not be enough. An article in Wired by Maryn McKenna described what other countries have done to contain bacterial threats: "When the Netherlands wanted to beat back the emergence of MRSA, that country passed laws requiring every hospital to test patients before letting them in the door…When Israel wanted to counter KPC (another acronym for carbapenem-resistance), which was ripping through its hospitals…it created a national task force and imposed mandatory national measures for detecting and confining the infection." But as Ms. McKenna notes in her article, in the U.S. "there are no reimbursements under Medicare for infection-control as a hospital task; and…the National Institutes of Health is not funding resistance-countering research."

Fortunately, CRE hasn’t escaped from hospitals and nursing homes. Yet.