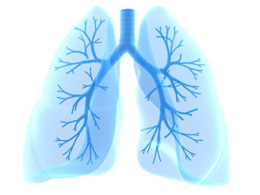 What is cystic fibrosis?
Cystic fibrosis (CF) is a genetically caused, chronic, progressive disease of the body’s mucous glands. It affects many systems in the body but primarily interferes with the normal functioning of the respiratory and digestive systems. The thick mucus characteristic of CF accumulates in the intestines and lungs and can lead to malnutrition, poor growth, chronic respiratory infections, and breathing problems. Patients can also develop many other medical concerns. The course of the disease varies greatly from patient to patient.

What are the symptoms?
Most CF problems are caused by the production of mucus that is thick and sticky, rather than watery. Symptoms include frequent coughing that brings up thick sputum, or phlegm, frequent bouts of bronchitis and pneumonia, which can lead to inflammation and permanent lung damage. Other symptoms include salty tasting skin, dehydration, infertility (mostly in men); chronic diarrhea or bulky, foul-smelling, and greasy stools; a big appetite but poor weight gain and growth (this is called “failure to thrive” and is due to the chronic malnutrition that results from an inability to absorb enough nutrients from food); stomach pain and discomfort caused by too much gas in the intestines. CF is also associated with the following medical problems:

What are the causes?
A defect in a gene called the cystic fibrosis transmembrane conductance regulator (CFTR) gene causes CF. Normally, the CFTR gene makes a protein that controls the movement of salt and water in and out of the cells in the body. This mechanism is critical for the normal secretion of all bodily fluids. Because of the defect, the CFTR gene doesn’t work properly leading to the formation of thick, sticky mucus and the very salty sweat that are the main features of CF. Everyone inherits two CFTR genes, one from each parent. Children who inherit an abnormal CFTR gene from both parents will have CF. Children who inherit a single abnormal CFTR gene from one parent will not have CF but will be carriers, capable of passing the abnormality to their own children. About 12 million Americans carry the defective CF gene but many don’t know it.

What is the conventional treatment of cystic fibrosis?
While there is no cure for CF, improvements in the management of respiratory disease and malnutrition now allow CF patients to survive into their early 30s and even 40s. Much of today’s medical care focuses on improved breathing through the use of inhaled bronchodilators as well as better antibiotics for management of chronic infections. In a few cases, single- and double-lung or heart-and-lung transplants have proved successful.

Treatment for the lungs involves breathing exercises or techniques such as chest physical therapy to dislodge and remove the thick mucus. A device called a chest vest can help remove mucus via high frequency chest wall oscillations. Devices called OPEP, for oscillatory positive expiratory pressure, can help patients breathe by creating airflow vibrations that help break mucus loose from airway walls and generating pressure during exhalation to help keep the airways open. Treatment may also include nebulized (put into a form that can be inhaled) drugs such as steroids, bronchodilators, antibiotics and agents that break up mucus. Proper nutrition is emphasized because the disease so often leads to chronic malnutrition.

Cystic fibrosis patients require specialized treatment available at more than 110 Cystic Fibrosis Foundation-accredited care centers throughout the United States. Patients are cared for by a team that includes a physician nurse, respiratory therapist, dietitian, physical therapist, social worker and in some cases a psychologist all of whom specialize in CF treatment.

What therapies does Dr. Weil recommend for cystic fibrosis?
The most important treatment – conventional or alternative – is nutrition, because the lung disease characteristic of CF progresses more slowly among children who are growing well. Many health care providers and parents are so focused on increasing the weight of children with CF that they allow patients to eat fast food and junk food. Instead, the following strategy is preferable:

Exercise is an important element in CF management, especially activities that emphasize breath work. Martial arts are often an ideal choice. Young CF patients should take a good multivitamin as well as antioxidants to build lung and liver health (use half the adult dose for children under 12). Probiotics, products containing “friendly” bacteria, can help lessen both lung and digestive problems. Seek products that contain lactobacillus GG.