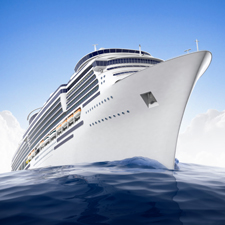 The norovirus is very contagious and causes stomach flu, properly known as acute gastroenteritis. Symptoms include diarrhea, vomiting, nausea, stomach pain and, sometimes, fever, headache and body aches, any or all of which can make you pretty miserable. The diarrhea and vomiting can quickly lead to dehydration, especially in young children, older adults, and people with other illnesses. The good news is that the whole awful business usually lasts for only one day although it can continue for up to three days. The bad news is that you can become infected repeatedly.

Outbreaks of norovirus on cruise ships garner a lot of publicity, but bear in mind that every year this virus causes up to 21 million illnesses, contributes to as many as 71,000 hospitalizations and leads to up to 800 deaths, according to the U.S. Centers for Disease Control and Prevention (CDC). Cases on cruise ships account for only a tiny percentage of those 21 million infections. Norovirus infection is the most common cause of foodborne-disease outbreaks in the United States. You can pick it up from an infected person, from contaminated food or water, or by touching contaminated surfaces. (Think about elevator buttons, stair rails, doorknobs, cash or coins and all the other things you touch with your bare hands during the day). One of the reasons we hear so much about norovirus outbreaks on cruise ships is that health officials track them, and report them more quickly than outbreaks on land. The CDC notes that close living quarters on cruise ships may increase the amount of group contact so that the virus is more easily transmitted. In addition, new passengers may bring the virus aboard with them.

An interesting article by Kent Sepkowitz, M.D., an infectious disease specialist at Memorial Sloan Kettering Cancer Center in New York, makes the point that the norovirus “is the persistent pest that it is because ingesting a tiny amount of virus—about 20 virus particles—is enough to cause disease." Dr. Sepkowitz adds “for most infections, [the amount needed to induce symptoms] is 100 or even 1,000 times that. Furthermore, a person with norovirus has about 70 billion viral particles per gram of stool. That’s enough to infect every man woman and child in the world with plenty to spare. And it surely doesn’t take much for one person sick in the bathroom with noro to infect the next bathroom occupant even when very good hygiene is followed."

On land or sea, your best protection against norovirus is hand washing. The CDC recommends washing your hands for 20 seconds before touching your mouth including when you eat, drink, smoke, brush your teeth or help a sick person. Also be sure to wash your hands after going to the bathroom, changing a diaper, touching the “high hand contact" surfaces I mentioned above, helping a sick person or blowing your nose. After washing, dry your hands with a paper towel and use that towel to turn off the faucet and open the bathroom door.

All of these are sensible precautions for everyone to follow year-round whether or not you’re on a cruise, and particularly during flu season. If soap and water are not available, the CDC advises using an ethanol alcohol-based hand sanitizer, preferably in a gel form. The sanitizer should consist of at least 60% ethanol.