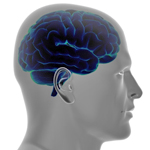 ALS (amyotrophic lateral sclerosis) is also known as Lou Gehrig’s disease, after the legendary New York Yankees’ star of the 1920s and 1930s; he was diagnosed with the disease in 1939 and died of it in 1941. ALS causes degeneration of nerve cells in the brain and spinal cord that control voluntary muscle movement.

As nerve cells waste away or die, they no longer can send messages to muscles, which in turn leads to muscle weakening and eventually to the inability to move the arms, legs and body or to swallow. When chest muscles stop working, patients become unable to breathe on their own. ALS doesn’t affect the senses or thinking ability and only rarely affects bladder or bowel function.

The cause of most cases of ALS is unknown, but about 10 percent are familial, associated with a genetic defect. Toxic injury to the brain may start the degenerative process in nonfamilial ALS.

Creatine, an important compound in muscle tissue, is the building block for ATP (adenosine triphosphate), the energy storing compound that fuels muscles during short, high-intensity exercise such as weight training.

I discussed your question about its use in ALS treatment with David Perlmutter, M.D., a neurologist in Florida (see www.perlhealth.com). He says that creatine, taken by itself, has been studied and found ineffective in the treatment of ALS. However, he tells me that a new study underway at the Massachusetts General Hospital is looking at creatine in combination two different doses of the breast cancer drug Tamoxifen to see if they are safe and effective for use in ALS patients. Dr. Perlmutter and his associates have been using Tamoxifen in their ALS patients for the past three years along with a ketogenic diet, which is very high in fat and very low in carbohydrates. The diet keeps the body in a constant state of "ketosis," in which it is forced to burn fats only. Dr. Perlmutter says the diet has been found to be exceptionally effective in the experimental animal model of ALS.

Tamoxifen emerged as a possible treatment for ALS more than 10 years ago when a neurology professor at the University of Wisconsin Hospital and Clinics in Madison saw that one of his ALS patients who was taking Tamoxifen for breast cancer seemed to be improving neurologically; the drug seemed to be slowing the progression of her ALS. Studies since then have shown that Tamoxifen prolongs survival in ALS patients with few side effects (primarily hot flashes). Since then preliminary evidence from animal studies of stroke and oxygen deprivation also suggests that Tamoxifen is neuroprotective.

As for Rilutek (riluzole), Dr. Perlmutter says that while this drug has been FDA approved for treatment of ALS, it has little effect on disease progression and is often associated with serious side effects.