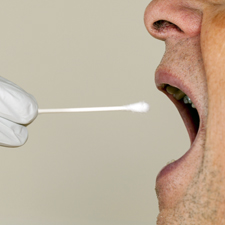 As we continue to look for a cure for Alzheimer’s disease, finding a way to detect it in its earliest stages and prevent it from progressing would be a huge step forward. The saliva test you mention is one of several methods being investigated for early detection, but I’m afraid it isn’t ready for prime time yet. However, if findings from initial studies are confirmed, it would be a much easier way to detect Alzheimer’s than other methods being studied, many of which require invasive and expensive tests. Saliva is easy to obtain and transport, and analyzing it has already been employed as a means of detecting hormone levels, some forms of cancer, and HIV status.

At this year’s (2015) Alzheimer’s Association International Conference in Washington, D.C., a research team from the University of Alberta, Canada, reported identifying substances in saliva that differentiated individuals with Alzheimer’s disease from those with mild cognitive impairment, and from seniors who were aging normally. The investigators also found that when they checked participants who had no signs of cognitive impairment for levels of substances seen in the saliva of Alzheimer’s patients, those with higher levels were slower in processing information. This was a small study with only 82 participants. The lead author said that while saliva testing offers promising potential for predicting and tracking cognitive decline, "we’re in the very early stages of this work and much more research is needed."

Other researchers reported on studies suggesting that an excess of certain proteins in cerebrospinal fluid is a "strong predictor" of Alzheimer’s, especially when considered in conjunction with other detection methods such as memory tests or MRI scans of the brain.

Still another team of investigators described six tests given to adults with no symptoms that they said could predict with "significant accuracy" the onset of mild cognitive impairment up to five years later. These included two specific tests of memory and thinking, levels of two different proteins (amyloid beta and p–tau) in cerebrospinal fluid and MRI brain scans to assess the thickness of two brain areas that are key to memory.

In describing the new approaches to detection, Maria Carrillo, Ph.D., chief science officer of the Alzheimer’s Association, said that they reflect a growing consensus that Alzheimer’s disease begins with changes in the brain decades before people begin to experience thinking and memory problems.

Identifying those initial changes would offer opportunities for research into how to stop the disease in its earliest stages.