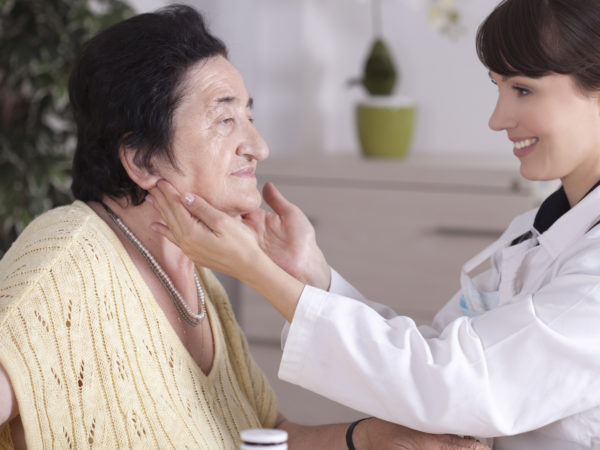 The study followed 80,343 Danish women with overactive thyroid and 61,873 women with underactive thyroid for 36 years. When the study began in 1978, none of the women had breast cancer. The researchers checked on breast cancer incidence among the hyperthyroid women every 7.4 years and the incidence among those with hypothyroidism every 4.9 years until 2013, when the study ended. They noted that a slightly increased risk of breast cancer was associated with hyperthyroidism in three out of four previous studies.

While the study showed an association between an overactive thyroid and breast cancer, it didn’t prove that the thyroid problem was the cause. In news reports study leader Jens Otto Lunde Jørgensen of Denmark’s Aarhus University Hospital said that a number of possibilities might explain the connection. For example, women with thyroid disease might see their doctors more often than other women and as a result may have mammograms and other medical exams more often. Or thyroid hormones and treatment of an overactive thyroid might increase the risk of breast cancer.

Bear in mind that an 11 percent increase isn’t as bad as it may seem. If the normal risk of breast cancer were 1 in 100, an 11 percent increase would raise it to 1.11 in 100. Similarly, a six percent decreased risk among women with hypothyroidism would mean that .96 rather than 1 woman in 100 would be at risk.

We can’t assume that the Danish results apply to women in the U.S. The population there is much more homogenous than ours. Here, ethnic variations would make it difficult to do a comparable study. Experts have also pointed out a flaw in the Danish study: it didn’t take into consideration the women’s family history.

If you’re hyperthyroid, I wouldn’t worry too much about an increased risk of breast cancer. Any difference would be small and doesn’t measure up to the two principal risks: being female and getting older. Focus instead on lifestyle measures you can take to lower risk: maintain a healthy weight, exercise regularly, avoid alcohol and long-term hormone replacement therapy. You can read more about steps you can take to reduce your breast cancer risk here.